Nokia 5 and Moto G5 both are launched at MWC 2017 in Barcelona. Both the phones are Mide-range Android Smartphones with very good quality hardware. Now here we are going to compare both the phones on various points. Nokia 5 Vs Moto G5 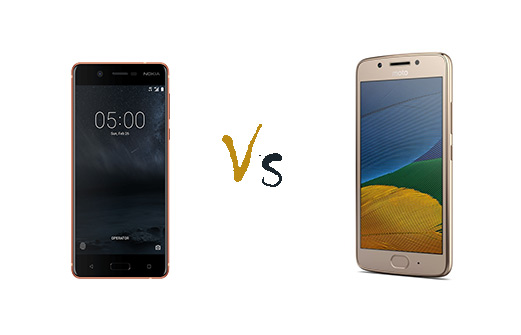 Although the Nokia 5 is little bigger than Moto G5 as it supports the 5.2” IPS LCD display with 1280 x 720 resolution, where as Moto G5 supports 5.0 inches IPS LCD display with 1080 x 1920 resolution. But still Nokia 5 feels comfortable in hand. On the visual look Nokia 5 wins the fight as it is having Totally clean, pure Design. On the back panel there is no antenna lines. On Moto G5 there is big black camera spot at the back. In this section both the devices have unique plus points, So its a draw between Nokia 5 and Moto G5.

You can Also see the specs comparison between Nokia 5 Vs Moto G5 below.