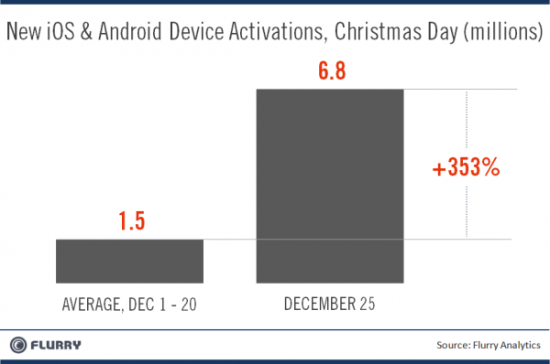 This Christmas the smartphone was the must-have gift and Flurry has the analytics data to back it up. According to their research, an average 1.5 million Android and iOS devices were activated daily between December 1st and 20th. For December 25th the number rose to an estimated 6.8 million, a 353 percent increase. The number is more than double the 2.8 million devices activated on Christmas in 2010.
After all of those Android and iOS devices were activated their new owners got to downloading apps right away with a record number 242 million apps downloaded between the two operating systems. The figure equates to a 125 percent increase from the December norm and eclipses last Christmas’ 150 million app downloads. Flurry didn’t provide data on the split between the two platforms for either activations or app downloads.
[via TechCrunch]