It seems rumour mill is working 24×7 to produce new rumours. After lot rumours of other devices, Now we have received specs sheet of the upcoming Galaxy Mega 2. GFXBench specifications for model number SM-G7508 is said to be powered by a 64-bit Qualcomm Snapdragon 410 processor clocked at 1.2GHz; a 13-megapixel rear camera with flash; a 5-megapixel front-facing camera; 2GB of RAM; 8GB of internal storage; microSD card support, and Android 4.4 KitKat.

The Samsung Galaxy Mega 2 will reportedly boast a massive 5.98-inch display with an HD resolution of 1280 x 720 pixels, which means that the upcoming device will be quite large for a smartphone. In terms of dimensions, the phablet measures 163.6 x 84.9 x 8.6 mm.

After the initial Specs and image leaks and FCC findings, TENAA, Chinese agency for phones to check it for country standards, has confirmed most of the above mentioned specs. But the 64 Bit processor and Android 4.4. Kitkat presence is not confirmed.

Above image are also leaked from TENAA site. 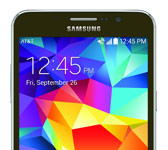