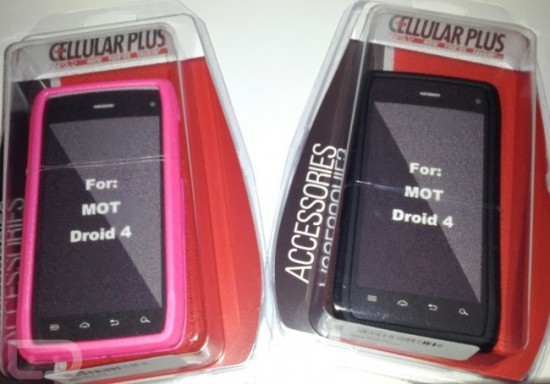 After the href=”http://en.wikipedia.org/wiki/Motorola_Droid” rel=”wikipedia” target=”_blank” title=”Motorola Droid”>Motorola Droid 4 failed to show up for its rumored coming out party back in December, popular thought shifted to a delayed release until sometime in February. This still may be the case, but the arrival of a few cases for the unreleased smartphone has us at least entertaining the idea that we could see the next entry in the popular franchise sooner. Not much can be gathered from the third-party accessories. Then again, we already know practically everything we need to about the Droid 4. Will the handset make an appearance at next week’s href=”http://www.cesweb.org/” rel=”homepage” target=”_blank” title=”Consumer Electronics Show”>CES happenings? It’s possible. Barring a complete surprise from href=”http://www.motorola.com/” rel=”homepage” target=”_blank” title=”Motorola”>Motorola, the manufacturer doesn’t have much else on their radar at this point.
[via DroidLife]