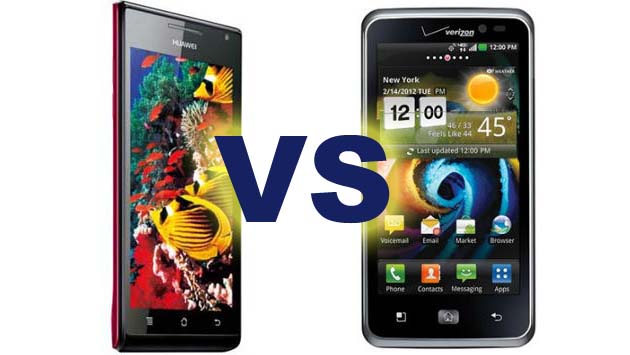 The LG Spectrum goes head-to-head with the Huawei Ascend P1 S. But which will come out on top and be the darling of CES 2012?

Most of the time LG produces very nice looking hardware and the new Spectrum certainly looks the business.

It’s nicely proportioned and overall has the whole ‘candy-bar’ aesthetic down very well, the corners are slightly rounded off but not to the point where the phone looks too soft and cartoony.

Helping to keep the visuals on the more serious side the cool black back panel has an interesting texture to it and, although usually quite difficult to pull off in our view, a chrome bezel on the front works rather nicely.

At 10.4mm it’s not the thinnest smartphone on the market but it’s not exactly bulky either and it has an elegantly shaped profile.

The housing for the rear-facing HD camera is also well handled giving a clean appearance and the spacing round the screen has been well considered to make things look as striking as possible.

Huawei has come straight out of left field with the Ascend P1 S. It’s a truly stunning phone to look at with a sturdy, business-like stature, clean and straight edges and a slight curvature on the lower part of the phone which doesn’t distract while still being interesting.

The screen is nicely placed in the bodywork with a very thin bezel on the sides, which lends a modern premium look to the phone.

There’s also a bit of a two-tone thing going on between the front and back panels, unless you choose the black option, that is, nonetheless the ‘ceramic white’ and ‘cherry blossom pink’ variants have a nice bit of contrast.

The back panel is more minimalist than LG’s offering – there’s no texturing here just a smooth glossy finish.

The camera housing is similarly neat and discreet as it’s opponent, although a little more-so as it appears to be even smaller still. The Ascend P1 S is ridiculously thin at only 6.48mm, that’s thinner than the Motorola Razr. Madness.

It’s a very tough call to make, we think both devices are a credit to the companies respective design teams, who appear to have pulled out all the stops for these premium flagship handsets.

We’d be more than happy with the looks of either phone, but when it comes down to it the Huawei gets our vote as the better looking of the two – it’s a much classier piece of kit.

The LG Spectrum is the larger phone of the two and consequently has a slightly bigger capacitive touchscreen at 4.5-inches. The Spectrum uses an HD IPS LCD display with multi-touch support and reinforced by Corning Gorilla Glass.

The resolution comes in at 1280×720 pixels which, when combined with the HD IPS tech, means that despite the large scale screen the pixel density clocks an iPhone rivalling 326 pixels-per-inch (ppi).

Huawei has opted for Samsung’s Super AMOLED display technology for its 4.3-inch capacitive touchscreen. Again, Gorilla Glass and multi-touch are part of the package and the Ascend’s display has a slightly lower resolution than its opponent at 960×540 pixels and a pixel density of 256ppi.

Both displays are top-notch, but the LG Spectrum just pips Huawei’s offering to the post with a screen which should push out much sharper visuals.

LG’s new handset sports 4GB of internal memory and 1GB of RAM while supporting micro SD expansion up to 32GB. A 16GB card will come with the phone.

Huawei’s device has pretty much the same setup, although nothing has yet been said about cards shipping with the phone.

We’re calling this one a draw.

LG’s Spectrum is also clocked at 1.5GHz and uses a Qualcomm Scorpion on the MSM8660 Snapdragon chipset with an Adreno 220 GPU.

Both phones are about as good as current dual core technology allows. At a push we’d say the Huawei’s TI OMAP chipset will offer better performance, but then on the other hand the LG’s Adreno GPU has more of a pull than the Ascend’s PowerVR model. So, it pretty much evens out.

In the end we think they’ll both deliver equally blistering performance for apps and games.

Even though quad core looks set to become de rigueur for 2012, dual core will continue to thrive and these two handsets show the rest how it’s done.

Operating System
These are both Android handsets but while the Huawei boasts the latest build, 4.0 Ice Cream Sandwich, LG’s is looking a little sheepish on 2.3 Gingerbread.

It’s not yet clear whether the LG will get an upgrade boost after launch but if it doesn’t we can see it lagging behind.

It’s a phone with a premium spec which will probably earn it a premium price, and yet it’ll be running an outdated operating system as Ice Cream Sandwich becomes the standard for top-end phones.

Ice Cream Sandwich may not be perfect but it is a much more slick iteration of Google’s platform than Gingerbread, which by comparison hobbles along.

Camera
As might be expected for flagship smartphones, these are both sporting 8-megapixel primary shooters with a resolution of 3264×2448 pixels capable of 1080p video capture. They also both have 1.3-megapixel front-facing cameras.

The Huawei Ascend also features autofocus and geo-tagging, but the rest of its feature line-up is a little different. It sports a dual LED flash and High Dynamic Range (HDR), another method of light and exposure control.

Although both setups sound excellent, in terms of features LG has gone to greater lengths here.

Final Thoughts
These both sound like great phones to us and each clearly has its strengths and weaknesses.

The LG has a better display and camera setup, but at the same time the Huawei puts up a great show in both these areas.

The Ascend P1 S for now has the better operating system, though this could change, and while we think the Huawei looks much nicer both handsets have fantastic visual design.

Top this off with equally good processing power and storage space and it becomes very difficult to pick a winner.

We actually think, when it comes down to it, there isn’t one.

If we were spending our money we’d go for the Huawei, but then we’re suckers for a pretty face. And yet, within that logic, there’s also no denying that the LG Spectrum is one desirable device in its own right.

Still though – at a push we’d always go with Huawei.