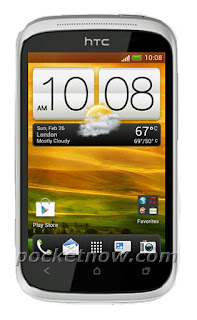 HTC Golf upcoming Android Device Press Shots leaked today by PocketNow. Its Design is something similar to new One Series. It would launch as Wildfire C later this year. It will run on the Android 4.0 Ice Cream Sandwich operating system, it also features a single-core processor and 512MB of RAM to go along with the previously mentioned 5MP camera. A 3.5-inch display will sport a resolution of 480×320. Ice Cream Sandwich device will also carry HTC’s Sense 4.0 user interface. Not only that, it is said that you will benefit from an additional 25GB of free Dropbox storage as well.