GoAndroid
Home HTC HTC sees Q1 revenue lagging
href=”http://www.htc.com/” rel=”homepage” target=”_blank” title=”HTC”>HTC world number 5 smartphone maker company said on Monday it sees a drop in revenue of as much as 36 percent in the first quarter to between T$65 billion and T$70 billion ($2.20-2.37 billion), from T$101.42 billion in the previous three months, as it prepares to launch new models, but said its difficulties were “short term.” 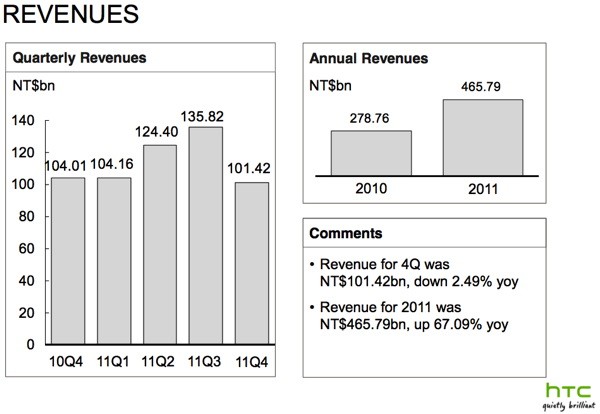 It is expected that HTC going to roll out four models later this month at the Barcelona Mobile World Congress, including an ultra-slim type, currently codenamed the HTC Ville, and one that uses advanced quad-core chips.

Operating margin, which tracks the percentage of sales less operating costs, will drop to 7.5 percent this quarter, from 12.7 percent in the previous three-month period, HTC said today. That’s the lowest in at least three years, according to data compiled by href=”http://www.bloomberg.com/company” rel=”homepage” target=”_blank” title=”Bloomberg L.P.”>Bloomberg.

Net income is expected to drop a record 39 percent to NT$9.1 billion this quarter, according to the average of 13 analyst estimates compiled by Bloomberg. HTC didn’t provide a profit forecast.

Demand for smartphones, which connect to the Internet and have high-quality displays, propelled the category to 54 percent growth in the fourth quarter, researcher href=”http://www.strategyanalytics.com/” rel=”homepage” target=”_blank” title=”Strategy Analytics”>Strategy Analytics said Jan. 26. That outpaced the 11 percent growth in the wider handset market which includes less-advanced models, the researcher said in a separate statement.

HTC revenue may drop about 1 percent this year to NT$462 billion, according to the average of 15 analyst estimates compiled since it reported fourth-quarter earnings.

“There’s a real possibility that HTC may not grow shipments this year, which means they would lose market share because the rest of market is growing,” said Roxy Wong, who rates HTC “reduce” at Mirae Asset Securities Co. in Hong Kong. He estimates global smartphone shipments will climb more than 30 percent this year.

Former contract maker HTC had a fairytale ride in 2010 and early 2011, when its shares more than tripled in the 14 months to April 2011 and sales grew four-fold in 1- years as consumers snapped up its innovative phones with their distinctive large clock numerals.

But an equally rapid fall from grace saw its stock become the worst performer among global smartphone companies last year, down 42 percent.