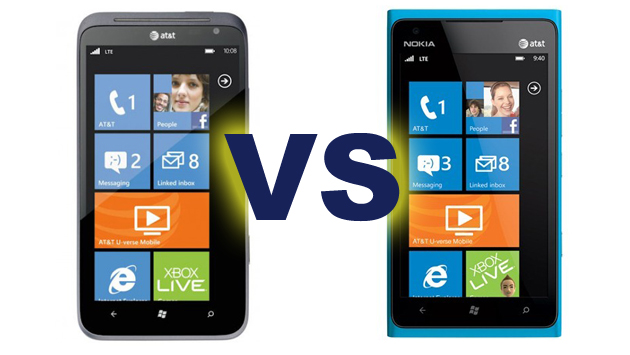 Regular readers will probably be familiar with our feelings on HTC’s consistent design approach.

That is, we don’t much care for all the near-identical looking clones with slightly different innards the Taiwanese manufacturer continually churns out.

For HTC, the Titan II does look good, but that’s not really saying much as, against most of the more diverse and interesting looking competition on the market, it’s simply far too bland and does not stand out at all. We yearn for a change from HTC and with the Titan II we are still left wanting.

Nokia, on the other hand, has a bit of a rep round here for producing devices with a bit of energy, style and class to them.

You’ll usually get something at least interesting to look at from Nokia and, although it is essentially a sized-up N9 or Lumia 800, the Lumia 900 is far more interesting than HTC’s generic profile.

You won’t find softly curving corners here, instead things are tapered and angular with sharp edges and striking lines. We approve.

Nokia easily takes the Form category with its bold design.

However, we did find the screen a little on the small side at 3.7-inches. The Lumia 900, being the larger cousin to the Lumia 800, has a much larger screen this time around at 4.3-iches.

The resolution is the same 800×480 pixels as its smaller stable-mate and consequently the pixel density is a little lower at 217 pixels-per-inch (PPI), but this is still better than its opponent’s offering and should give decently crisp images and video.

Gorilla Glass has been used here so it’ll be quite resilient and it features multi-touch support.

The Titan II has a suitably big touchscreen at 4.7-inches. Again the resolution is 800×480 pixels and again this means the pixel density takes a hit down to 199PPI.

It supports multi-touch and uses Sony’s S-LCD technology, which is similar to Samsung’s AMOLED in offering enhanced brightness, colour and power efficiency.

Although it has to be said it’s generally not quite as good as AMOLED at pushing out such sharp pictures, in our experience.

Essentially, the Titan II’s display setup is pretty much identical to its predecessor, the original Titan.

We have to side with Nokia on this one, the Lumia 900 will provide a much more vivid picture.

Storage
Nokia’s Lumia 900 has the same memory setup as its predecessor, which means 16GB of internal storage and no card slot, along with 512MB of RAM to boost processing tasks.

Likewise the Titan II has the same setup as the original Titan, which incidentally is also the same as the Nokia Lumia 800 and 900 smartphones.

This one’s a draw then.

Processor
Both phones are based on Qualcomm Scorpion hardware.

The Nokia Lumia 900 runs a 1.4GHz clock-speed just like its smaller kin, this time however it uses the MSM8255T Snapdragon chipset, along with the same Adreno 205 graphics processing unit (GPU).

HTC’s Titan 2 has a slightly higher clock-speed at 1.5GHz but uses the same MSM8255T Snapdragon chipset and GPU combination.

Being Windows Phone 7 devices, they’ll both be very well optimised so you likely won’t notice they’re single core phones unless you try really hammering them with some hugely intensive games and even then you’ll struggle to see any frame-rate drops.

You can expect very similar performance from both these handsets.

Operating System
As mentioned above, these are both Windows Phone 7 ‘Mango’ handsets and as such will both feature the latest build of Microsoft’s colourful and innovative operating system.

Windows Phone runs very smoothly indeed and also has some of the best social networking and contact integration we’ve ever seen, so if you like keeping connected it’s a good choice.

This is primarily handled by the People Hub, which lets our create contact groups and aggregates feeds from Twitter, Facebook, instant-messaging, email and SMS texts. It’ll let you message multiple contacts simultaneously across multiple channels, too, so you don’t need to keep hopping between apps.

Our main grievance is the comparatively severe lack of apps and content on Microsoft’s marketplace when you stack it alongside the Android and iOS equivalents. This is something time will likely fix as we don’t think the platform is going to disappear anytime soon.

Generally we find Windows Phone very easy to recommend if you really need to be plugged in to your social circle 24/7.

If apps are a big part of your phone experience though, you may want to look elsewhere, for now at least.

The only real difference is the Lumia 900 features the addition of a 1-megapixel secondary camera.

This is a bit of a shame really as although the setup looks impressive on paper, we found the Lumia 800’s near-identical setup to be somewhat disappointing. At least you can make video calls, though, a rarity for Windows Phone devices.

HTC’s Titan II will offer what appears to be a much more satisfying Windows Phone camera experience, thanks to an impressively specced 16-megapixel primary camera with a wide-angle lens, backside-illuminated sensor and a 4640×3480 pixel resolution.

There’s also a 1.3-megapixel front-facing secondary camera for video calls and the like.

Considering Nokia has historically dominated the camera phone sphere it now appears to have been trumped at its own game by HTC.

The Titan II takes this round.

Final thoughts
There isn’t actually a huge difference between these phones overall, they offer similar power, the same operating system and the same storage capabilities. They’re also both larger handsets.

The key differences are that the Lumia 900 looks much, much prettier and has a much cleaner display.

The HTC Titan II is by no means a bad phone, but against the Nokia 900 the only trump card it’s carrying is the camera setup, but what a camera setup it is. If you’re looking for a first rate camera phone this may be right up your street, assuming it can stand up to testing in our forthcoming review.