GoAndroid
Home Old Samsung Announces Dual-SIM Galaxy Y Duos and Galaxy Y Pro Duos
Take the Samsung Galaxy Y and Galaxy Y Pro, slap on dual-SIM support, and you have the pair of handsets announced by the Korean manufacturer today. Just with the original lineup of Galaxy Y phones, the new handsets feature 830MHz processors, 3MP rear cameras, and VGA front-facing cameras. The Galaxy Y Pro Duos gets a 2.6-inch touchscreen with a QWERTY keyboard found below, a BlackBerry-esque staple of most handsets with the ‘pro’ label. The Galaxy Y Duos foregoes the keyboard for a 3.14-inch display. 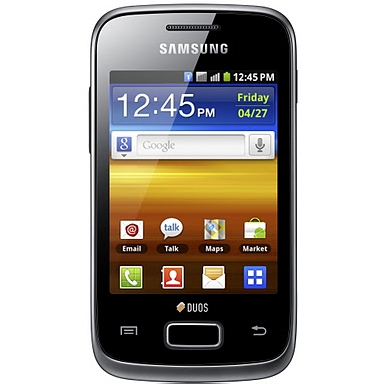 Folks in Europe, Asia, South America, and Africa can expect to see the two new offerings in January, though pricing has not yet been announced. We fully expect the Galaxy Y Duos and Galaxy Y Pro Duos to make an appearance at CES in Las Vegas.
[press release]