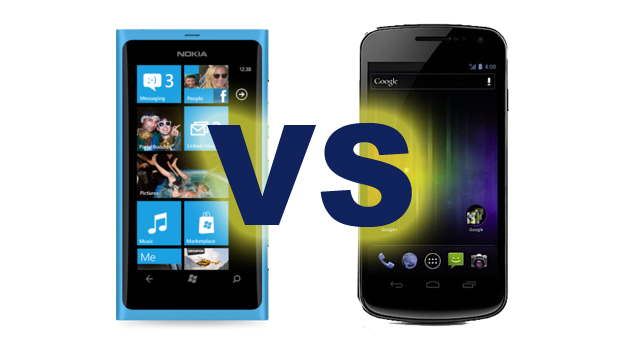 Form
Samsung Galaxy Nexus – 135.5×67.9×8.9mm,135g
Nokia Lumia 800 – 116.5×61.2×12.1mm,142g
Visually both devices are very impressive with some distinctive and unique design features which help them stand out from the competition.
The Nokia Lumia 800 is a very sharp and angular handset being bluntly rectangular in shape and topped by a gently curved glass screen.
Build quality feels very impressive indeed, the phone uses an aluminium unibody and it’s probably one of the most well put-together handsets we’ve seen this year.
Samsung’s Galaxy Nexus is the polar opposite in terms of aesthetics, it’s all curves but it isn’t over-the-top – being a larger phone overall the longer lines compliment the slight curvature at either end of the device quite nicely.
Sadly, the Galaxy Nexus doesn’t feel quite so solid construction-wise as its opponent.
We have to give this round to the Nokia Lumia 800.
Winner – Nokia Lumia 800
Display
Nokia’s Lumia 800 has a relatively small display at 3.7-inches but it makes up for this with incredibly sharp picture quality thanks to the use of a Samsung AMOLED screen and Nokia’s own ClearBlack technology.
It features multi-touch support and reinforced Gorilla Glass, while the 480×800 pixel resolution grants a pixel density clocking in at 252 pixels-per-inch (ppi).
It’s one of the best displays on a Windows Phone we’ve seen to date, the screen is bright and crystal clear with vivid colours which really pop out at you.
The Galaxy Nexus uses Samsung’s own Super AMOLED technology, which is slightly better than the Nokia’s ‘vanilla’ AMOLED and it’s a pretty big slate of glass at 4.65-inches.
Despite its large size, Samsung has managed to keep the pixel density very high indeed, a 720×1280 pixel resolution results in 316ppi.
Multi-touch is again supported and an oleophobic coating protects the screen from oily fingerprints.
Both displays are pretty amazing to behold and each manufacturer has clearly lavished a lot of effort and attention on these screens.
At the end of the day, however, the Samsung Galaxy Nexus goes that extra mile, not only is it a substantially sized display, making media easier and more satisfying to view, but it achieves this without compromising on picture quality and goes so far as to offer some of the best available. It’s very impressive stuff indeed.
Winner – Samsung Galaxy Nexus

Storage
Samsung’s flagship Android Ice Cream Sandwich phone has two options for storage, with choices of either 16GB or 32GB onboard. Processing power is supplemented by 1GB of RAM.
The Nokia Lumia 800 only has the 16GB option for internal capacity which, while ample, is half the top-end offered by Samsung’s device. It’s also slightly behind on the RAM side of things with around half the memory of the Galaxy Nexus at 512MB.
Neither smartphone is fitted with a card slot, meaning there’s no option to expand storage space with microSD.
Samsung’s Galaxy Nexus wins this round by doubling up on the Lumia 800’s offerings.
Winner – Samsung Galaxy Nexus

Processor
Discussing the processors between Android and Windows Phones is a tricky thing, because you invariably run up against the issue of how the two platforms work in relation to optimisation.
However, the Galaxy Nexus is a little different from most other Android phones.
The problem with Android normally is it’s a one size fits all system which isn’t optimised very well, but this isn’t an issue on the Galaxy Nexus because, as it’s the Android Ice Cream Sandwich flagship device Samsung has worked closely with Google to get everything as finely tuned as possible.
The Galaxy Nexus uses a dual core ARM Cortex-A9 processor clocked at 1.2GHz and running the Texas Instruments OMAP 4460 chipset alongside a PowerVR SGX540 graphics processing unit (GPU).
Performance on this setup is going to be something pretty special, especially with the extra optimisation and tuning.
Nokia’s Lumia 800 runs on single core hardware but again it’s been well optimised and offers really good performance from its 1.4GHz Qualcomm Scorpion processor running the MSM8255 Snapdragon chipset and an Adreno 205 GPU.
Both offer excellent performance in terms of typical smartphone tasks and navigating their respective interfaces.
However, the Galaxy Nexus will handle high-end apps and games with demanding graphics much more capably and will remain the more competitive option looking ahead to the future.
Winner – Samsung Galaxy Nexus

Operating System
Microsoft’s Windows Phone ‘Mango’ platform, which the Nokia Lumia 800 runs, is a refreshing and innovative system to use.
It completely shuns the conventional ‘desktop’ style homescreens populated by app shortcuts found on Android, iOS and BlackBerry OS.
Instead, it opts for a continuous scrolling interface populated by ‘Live Tiles’ which push useful app information to the surface, rather like miniaturised widgets.
Social networking integration and the merging of communication methods (including email, text, instant messaging and calls) is excellent on Windows Phone, there is currently no other platform which gets you connected so easily.
It’s not perfect, however, for a start there is a severe lack of apps comparative to Android and iOS and many apps which are free on these other platforms come with a price tag on Windows Phone.
Windows Phone also doesn’t feature true multi-tasking but rather a substitute which, while better than nothing, can at times be frustrating.
Essentially, apps are put into hibernation in the background but do not continue to function.
Switching between them is commendably easy but unlike competing platforms you cannot, for example, put a social networking app to sleep and expect it to update.
This doesn’t affect the integrated feed from the People Hub, but sometimes you might want more direct control through an official app and it’s annoying that they cannot perform any background tasks.
Android’s multi-tasking remains unsurpassed, the system handles multiple running programs with ease and the intuitive quick-switching menu has made the jump from the tablet-only Honeycomb build. You can also swipe apps away with gestures, which is nice.
In many other ways Ice Cream Sandwich seems like it’s simply playing catch-up with its tablet-only predecessor, Honeycomb, and Apple’s iOS.
It’s a decent system but it’s not the exceptional revolution many were waiting for.
Everything has been given a facelift and the interface is reasonably intuitive – things are where you expect them to be.
While Windows Phone looks nice and feels different it could have been a much more customisable platform, generally speaking, while we loved the social networking integration for a heightened sense of being ‘plugged in’ to our social circles, most other areas left us wanting and, frankly, made us miss Android and iOS.
Winner – Samsung Galaxy Nexus

Camera
The Lumia 800 has an 8-megapixel primary camera at a 3264×2448 pixel resolution and capable of 720p video capture.
Regardless of the megapixel count and boasted Carl Zeiss designer optics something about this setup can’t be particularly good because, when reviewing the phone we found the results were not that impressive.
It features a dual LED flash, autofocus, touch focus, geo-tagging, digital zoom, exposure control and white balance.
Samsung’s Galaxy Nexus is equally disappointing with its lacklustre 5-megapixel primary camera at 2592×1936 pixels.
Video capture is 1080p but it’s unimpressive in practice – the Galaxy S2’s setup is much better.
Features-wise it has autofocus, LED flash, touch focus, geo-tagging, face detection, digital zoom, white balance, panoramic capture mode and a 1.3-megapixel secondary camera.
Neither device wins here, we’re calling it a draw but that doesn’t mean they’re equal, it just means they’ve both failed to deliver decent cameras as far as premium flagship phones are concerned.
Winner – Draw

Final Thoughts
By now it probably sounds as though we prefer the Galaxy Nexus over the Lumia 800, but this isn’t actually the case.
When it comes down to it, we feel the Lumia 800 is a much more complete and well-thought-out smartphone.
The Lumia 800 has lived up far more to our expectations of what a Nokia flagship Windows Phone should be, while the Galaxy Nexus has left us wanting more from Samsung.
The Galaxy S2 proves Samsung can create a much better Android phone than the Galaxy Nexus despite its extraordinary screen and all the perks of the ICS platform.
We really like Windows Phone ‘Mango’ but it has its limitations which made us want to go back to other platforms.
This isn’t a weakness of Nokia’s handset itself though and, so far at least, Microsoft has been exemplary at rolling out updates across the board.
In time the Lumia 800 will certainly change and likely for the better. It’s uncertain whether the same can be said for the Galaxy Nexus.