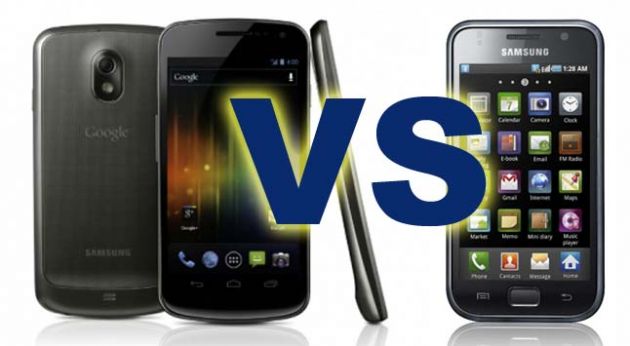 href=”http://www.samsung.com/” rel=”homepage” target=”_blank” title=”Samsung Group”>Samsung’s Galaxy range has been hugely successful, with devices available to suit every requirement and price point. The smartphone that sits atop that range is the company’s joint venture with href=”http://google.com/” rel=”homepage” target=”_blank” title=”Google”>Google, the Galaxy Nexus, and it’s a device that sees both Google and Samsung raise their game exponentially.

To get a proper view of how far Samsung has brought both href=”http://code.google.com/android/” rel=”homepage” target=”_blank” title=”Android”>Google’s Android brand, and it’s own Galaxy label, we’ve decided to hold the Nexus up against the first Galaxy device to come to market, the excellent Samsung Galaxy S.

Samsung’s Galaxy S features a 4-inch Super AMOLED screen which was way ahead of its time. The display operates at a resolution of 400 x 800 and has a pixel density of 233PPI, which isn’t bad for a device that’s getting on for two years old!

In terms of performance the Galaxy S’s screen does exactly what you’d expect a top of the range Super AMOLED to do. It’s responsive, stunning to look at, offers great sunlight legibility and doesn’t sap your battery in five minutes flat.

The Galaxy Nexus features the next generation of Samsung’s AMOLED technology in the form of a 4.65-inch Super AMOLED screen which offers 720P visuals, operating at a resolution of 720×1280 pixels.

The display also has a 316PPI pixel density too, which is up there with the best of them.

There can be no doubt that the display on the Galaxy Nexus is better than its older brother. It’s sharper, brighter and generally more responsive than its competitor, but that’s not to say the Galaxy S is weak in this department. It is still light years ahead of many other devices that are new to market.

As with all Samsung’s Galaxy devices, both the Nexus and the S are Android powered.

The Galaxy Nexus runs the very latest version of the software, 4.0, otherwise known as Ice Cream Sandwich, which is brimming with new features.

Included in the latest version of the OS is a fun new feature called Face Unlock, which allows you to secure your device by taking a snapshot of your mug, a shiny new UI with lots of new eye candy, improved core apps such as Gmail and a massively overhauled camera interface.

The update, which will eventually roll out to most Android devices on the market, brings the OS into line with the behemoth that is href=”http://www.apple.com/ios” rel=”homepage” target=”_blank” title=”IOS (Apple)”>iOS, and once you try it, we think you’ll love it.

The Galaxy S features a more standard version of the Android platform, version 2.1, otherwise known as Éclair (though it is upgradable to version 2.3, or Gingerbread), which offers everything you’ve come to know, love and expect from the little green robot.

You’ve got plenty of customisation potential, excellent Web browsing, core apps such as href=”http://www.youtube.com/” rel=”homepage” target=”_blank” title=”YouTube”>YouTube, Gmail and Google Maps and Samsung’s own TouchWiz UI, which adds social networking integration and other upgrades to the package.

Naturally the Galaxy Nexus races ahead in this round too. Ice Cream Sandwich offers so many improvements it’s almost unrecognisable when held up against its previous incarnation, and each and every tweak brings it nearer to perfection.

The Galaxy Nexus is a good looking, solid device with a generally pleasing aesthetic. It’s comfortable to hold and use and feels perfectly well crafted though, being a Samsung device, it is overflowing with plasticity; and while it positively affects the weight of the device it isn’t a universally pleasing characteristic.

Like it’s stable mate, the Galaxy S features a sleek, minimalist chassis, and looks every bit the premium smartphone. Unfortunately it also shares the toy like feel of its sibling, thanks to its plastic frame. It isn’t the end of the world for either device, but it certainly tempers the wow factor.

Samsung’s Galaxy Nexus is powered by a dual-core 1.2GHz CPU, and also offers PowerVR SGX540 graphics and 1GB RAM, in addition to the 16 or 32GB of on-board storage space (though the device does lack support for external memory cards).

The drive train of the device isn’t wildly different from the Galaxy S 2, but that’s by no means a complaint. It’s a fast, responsive and very capable smartphone indeed.

The Samsung Galaxy S is powered by a 1GHz single-core Hummingbird CPU and features PowerVRSGX540 graphics, 512MB RAM and either 8 or 16GB on-board storage, as well as support for Micro SD cards up to 32GB in size.

At launch there were a few issues with the Galaxy S performance, with some users falling foul of lag and force close errors, but these issues were largely sorted out through software updates.

In its current form, running Android version 2.3, the Samsung Galaxy S is a fast smartphone that will do almost anything you task it to..except beat the Galaxy Nexus.

The device is capable of snapping some perfectly nice images in the right conditions though and captured video is of a generally high standard.

In addition to the primary optics the device also features a secondary VGA camera for video-calling.

The Galaxy Nexus features a 5-megapixel camera too, though this device benefits from an LED flash, touch-focus, geo-tagging, face detection and almost no shutter lag.

The device captures video at 1080P with a good level of success and also offers a 1.3-megapixel secondary camera capable of 720P video capture.

So that’s that. A clean sweep for the better, faster, stronger Galaxy Nexus.

The device is up there with the best two or three devices in the world today and it’s a joy to use.

The Galaxy S is by no means a failure though. To even be able to hold its own against a brand new device after nearly 2 years shows just how ahead of the curve the phone was at its launch, and it still represents great value today, with some super-competitive deals available for the device.

If you want the very best Android experience around though, choose the Samsung Galaxy Nexus, you won’t be disappointed.