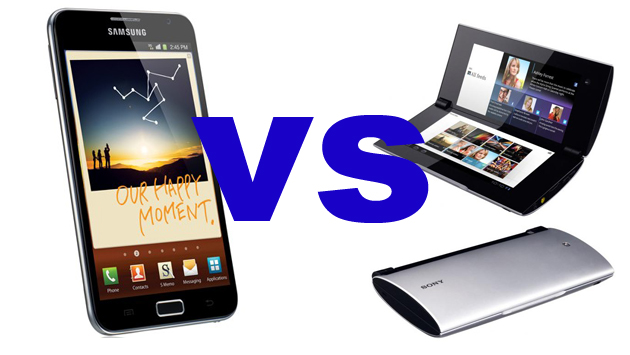 Samsung’s Galaxy Note is a small but perfectly formed device which aims to offer users the best traits of both a smartphone and a full size tablet.

There’s a new kid in town though. And it wants the title of best mini tablet. That tablet is the odd looking Sony Tablet P. Can the challenger take the title from Samsung’s pocket stunner? Let’s find out.

This is another all-Android affair with both of our contenders running Google’s popular operating system.

The Sony Tablet P runs on version 3.2, otherwise known as Honeycomb, and enjoys all of the tablet-centric tweaks that Google has put in place to make the software play well with larger screened devices, such as re-designed core apps, new UI and overhauled notification system.

Samsung’s Galaxy Note however, runs on version 2.3 of the platform, AKA Honeycomb, which represents an interesting choice by Samsung.

There’s no tablet driven OS here. The platform is exactly as you would find it in one of the company’s Galaxy series smartphones, right down to the TouchWiz 4.0 UI, which gives users extended social networking functionality and other content expansions such as eBooks and music.

The core of the operating system on both counts is still refreshingly simple and easy to use and both devices benefit from the 400,000+ apps on offer in the Android market, though the lack of tablet specific applications is, as ever, a niggle.

Sony’s Tablet P is a weird looking device which takes the fundamentals of tablet design and throws them out of the window. The device is more like a Nintendo DS than a tablet with dual 5.5-inch screens secreted inside a folding, clamshell form factor.

The device is well made though and feels durable and comfortable when in use and the obvious benefit of the folding tablet design is that the screens are well protected when the device is shut.

Samsung’s Galaxy Note is much more traditional with a slim, minimalist design with a single hardware key on the front of the device, much like it’s sibling the Galaxy S2.

The Note is constructed well enough but might be too light for some, owing to the almost exclusive use of plastics in construction.

While the Tablet P is an interesting deviation from the norm we couldn’t get past the display being broken down into two parts, and felt that the Galaxy Note offered the more portable option, along with being a much nicer device to pick up and use.

Samsung’s Galaxy Note features a fantastic 5.3-inch Super AMOLED capacitive touchscreen which operates at a resolution of 800 x 1280 pixels and has a pixel density of 285PPI.

Visuals are stunning on the Note, thanks to Samsung’s superior screen technology and the device is able to offer stunning colours, deep blacks and very pleasing viewing angles.

As we mentioned previously, Sony’s Tablet P features two TFT screens, both measuring 5.5-inches, which ultimately gives the user twice the screen real-estate for a wee bit more bulk than the Note.

Initially we were happy with the arrangement and found it to be quite pleasing when surfing the Web and completing general tasks, but the wheels well and truly fell off when we realised that only the uppermost screen is used to view media, with the bottom being reserved for controls.

The device also features a secondary VGA camera for video calling, which we found to be more than adequate.

Samsung’s Galaxy Note features an 8-megapixel primary camera, which is more than a match for the Tablet P’s offering.

Samsung also opted to fit the Galaxy Note with a 2-megapixel secondary camera for video calling and it’s just the ticket for staying in touch with people when you’re on the go.

Power
Sony’s Tablet P is driven by a 1GHz dual-core CPU and also offers ULP href=”http://en.wikipedia.org/wiki/GeForce” rel=”wikipedia” target=”_blank” title=”GeForce”>GeForce graphics, 1GB RAM and 4GB of on-board storage with the option of expanding via Micro SD (up to 32GB).

The power on offer in the device is more than enough for surfing the Web and casual gaming but the device may struggle to compete with the new influx of devices in the new year, which will no doubt utilise newer architecture.

Samsung’s Galaxy Note is powered by a 1.4GHz dual-core CPU and benefits from Mali-400MP graphics, 1GB RAM, 16 or 32GB of storage and Micro SD support, making it a pretty well rounded device.

We found the Note to be a pleasure to use. You’ll find no lag or other problems with the device. It’s just fast and fun.

Samsung’s Galaxy Note is the clear winner today. With a fast drive-train, slim body and top notch camera, the Note is a fantastic device and one that we would wholeheartedly recommend if you’re looking for something new without wanting to up the ante and buy a full-on tablet.

Sony deserves credit for trying to breathe a few changes into the tablet market. But for all its innovativeness, the Tablet P largely falls flat, both as a working device and as a novelty one.

Put simply the Tablet P cannot compete with the likes of the Samsung Galaxy Note.