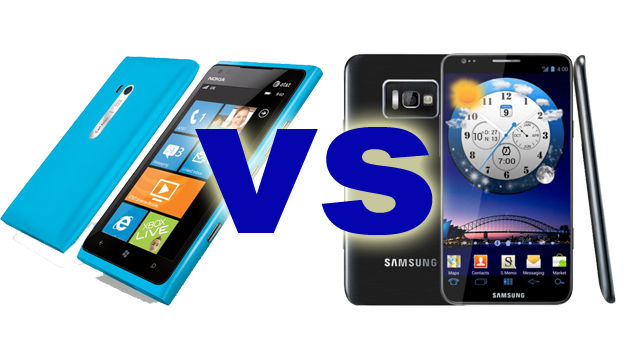 href=”http://nokia.com/” rel=”homepage” target=”_blank” title=”Nokia”>Nokia‘s alliance with Microsoft and the subsequent Lumia range that it gave birth to have done much to steady the ship in Espoo. People’s faith is returning in the one-time giant of the mobile phone world and the company can begin to look forward again.

The latest Lumia to be unveiled is the 900 and it has the potential to be the best yet. Our aim today, however, is to see how it stacks up against the successor to one of the most popular devices in the world, the href=”http://www.samsung.com/” rel=”homepage” target=”_blank” title=”Samsung”>Samsung Galaxy S3.

So we’re taking all of the rumours and leaks surrounding Samsung’s new flagship and putting the Lumia 900 to a stern test.

The device also has a Gorilla Glass coating for extra durability.

We expect the screen to be at least on par with previous Lumia’s, which is to say responsive, vivid and very pleasing to use.

We’re certain that the Galaxy S3 will feature some notable improvements over the S2, which leaves us looking at a screen with a pixel density in excess of 217PPI.

Rumours are pointing to the device having a 720P screen that measures 4.7-inches and there is even some talk of the device boasting 3D visuals.

Power
The Galaxy S3 will have significantly more power than its predecessor, which itself would have trounced the Lumia 900.

We expect Samsung to outfit the new Galaxy S3 with a quad-core chip clocked to around 1.5GHz, giving it more beans than any smartphone currently on the market.

The device is also likely to feature 2GB RAM, which will make it one speedy, efficient device!

As with previous Galaxy devices we expect the S3 to ship in 16 or 32GB flavours with support for Micro SD cards up to 32GB in capacity.

Nokia’s Lumia is powerful enough but doesn’t really have a drivetrain that will wow anybody.

It’s driven by a 1.4GHz single-core Scorpion CPU and also offers Adreno 205 GPU, which is currently more than enough to hand users a solid gaming experience.

The device only has 512MB RAM, as is the standard with Windows Phone devices and while it’s ample for the task at hand it isn’t really next-gen fodder, so we’re unsure with how it will cope with the next big system updates.

We expect the Samsung Galaxy S3 to launch with Android 4.0, or Ice Cream Sandwich. The device may abandon Samsung’s TouchWiz overlay entirely owing to the overhauled visuals of the OS.

As with all previous iterations users can get their hands on over 400,000 apps for the platform via the Android Market, which cover virtually any scenario and a vast number of them are ad-supported and as such 100% free to download.

Nokia’s Lumia 900 launches with Windows Phone 7.5, or Mango, and the OS shows some great improvements over the previous iteration of the software.

The OS was eminently usable to start with but the update to 7.5 brings with it some excellent improvements.

There are now over 60,000 apps available in the Windows Phone Marketplace too, which cover a variety of subjects.

Nokia’s Lumia 900 is a very well designed and crafted device.

As you’d expect from Nokia the device exudes durability and the chassis, crafted from polycarbonate, feels balanced and comfortable in the hands.

As we touched upon earlier, the device benefits from Gorilla Glass, which lends another vein of robustness to the whole, giving an overall impression of strength and attractiveness that doesn’t disappoint.

We expect the Samsung Galaxy S 3 to launch with similar specification to its brother.

We’re looking forward to seeing a chassis crafted from lightweight plastics, a razor blade thin form and some enhanced, futuristic materials on the rear of the device to give some grip-factor to proceedings.

In terms of build quality we don’t expect the Galaxy S 3 to be poor, but at the same time we would be very, very surprised to see the manufacturer push beyond the standard set by Nokia.

The Nokia Lumia 900 launches with an 8-megapixel Carl Zeiss-powered camera with autofocus, geo-tagging and dual-LED flash.

The device will capture video in 720P with the added bonus of video stabilisation and also offers a front-facing 1.3-megapixel camera for video calls.

The Samsung Galaxy S3 will likely launch with a 12-megapixel camera with dual-LED flash and is also likely to feature image stabilisation, face & smile recognition and touch focus.

The device may also improve on the 2-megapixel front-facing camera on offer in the Galaxy S 2, offering a 3-megapixel or greater sensor for video calling.

The device will capture video at 1080P.

If leaks, gossip and rumour are to be believed then Samsung’s Galaxy S3 is going to be the device to watch in 2012.

It has, in its rumoured form, easily bested the excellent Nokia Lumia 900, and we wouldn’t wager against the device doing the same to virtually every other device on the market.

The Nokia Lumia 900 put up a fight though and we believe it to be one of the finest Windows Phone smartphone’s to date. Plus it is also worth noting that Microsoft’s Windows Phone, on account of its optimisation, does not require quite as much grunt as Google’s href=”http://code.google.com/android/” rel=”homepage” target=”_blank” title=”Android”>Android operating system.