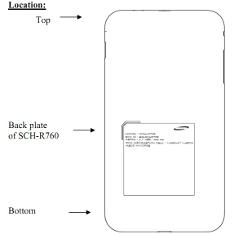 The folks over at the FCC have gotten hold of yet another Samsung Galaxy S II, where it is known as the Samsung R760 where model numbers are concerned, and this particular puppy is destined to land on US Cellular’s shelves. Definitely not one of the big four mobile carriers, the Samsung Galaxy S II here does not come with LTE connectivity, which means it will be your regular, vanilla Galaxy S II that has long been overtaken by other better and faster phones, and we do not think that Android 4.0 Ice Cream Sandwich will be pre-loaded on this model right out of the box, either. Without LTE connectivity according to the internal FCC documentation, you can be sure that this handset will not roll out when April comes knocking on your door. For subscribers of US Cellular, would you be picking this model up? It should not cost too much either, considering how the Galaxy S II has been around for quite some time already.