After a lot of wait at last Samsung introduced its much awaited Samsung Galaxy S III and its specs are also great. So we are competing it with HTC One X, its is also a big beast. The One X which goes on sale on AT&T in just a few days and some lucky persons are now receiving it. Both Phones are high end devices. So let’s start:

The Galaxy S III has a quad-core Exynos CPU, which should post some impressive benchmarks but it may launch with dual core processor in U.S. The One X uses a quad-core Tegra 3 internationally, but a dual-core Snapdragon S4 in the U.S.  The Galaxy S III also uses a larger battery than the One X: 2100 mAh compared to 1800 mAh. The One X offers just one option: 16GB of internal storage, with no microSD card slot for expandable memory. The Galaxy S III, on the other hand, will come in either 16 or 32GB flavors, with a 64GB version

Both Devices come with Android 4.o Ice Cream Sandwich. The One X features HTC’s Sense 4 UI overlay, while the Galaxy S III includes Samsung’s TouchWiz. Both phones can connect to your television via DLNA or MHL, and both phones include support for mobile payments through NFC. 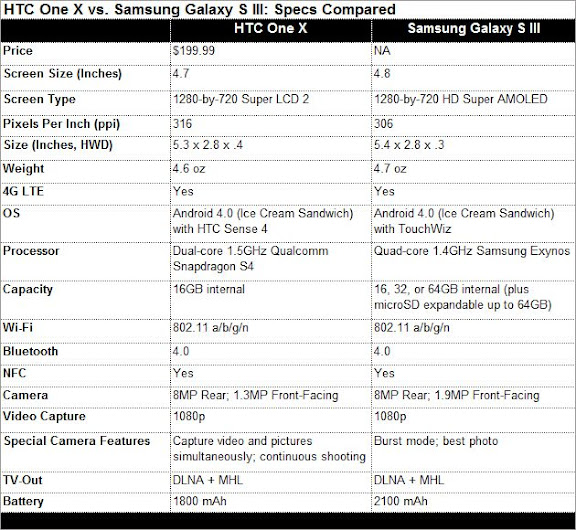