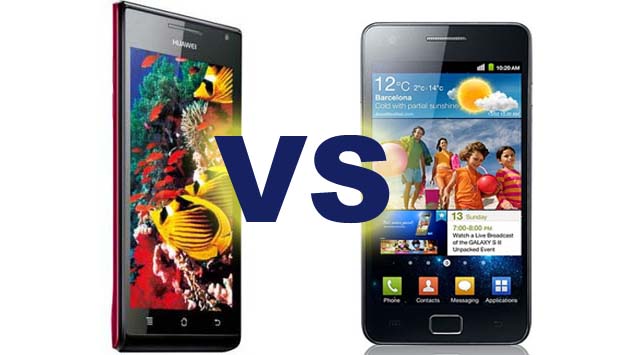 We’re very fond of the Samsung Galaxy S2’s design with its strikingly squared-off shape and large touchscreen dominating the otherwise minimalist finish with a great expanse of expensive-looking glass. It’s also one of the thinner phones around at only 8.5mm and the whole thing is very lightweight, though its size in the hand means it can feel slightly cumbersome.

Samsung has put the Galaxy S2 together well enough that you aren’t going to be worried it will fall apart and, in truth, we know the company uses some very high quality and hardwearing plastics, so it’s not a question of flimsiness either.

However, it is plastic that’s being used here nonetheless and the feel of it does dull the appeal somewhat, It’s still very much a premium phone but a touch of aluminium would’ve gone a long way to earning it extra brownie points.

The Huawei Ascend P1 S is a similar affair. It’s quite plasticky but it looks awesome thanks to its sharp lines.

We have to call this one a draw.

Display
Display technology is up to an appropriately high standard for these two premium smartphones. Samsung’s phone uses the company’s own Super AMOLED screen technology for its 4.3-inch capacitive display, which offers great picture quality and intense colours.

It’s toughened with reinforced Gorilla Glass, meaning you don’t have to treat the phone like an antique vase to ensure its longevity, while the resolution is a solid 800×480 pixels, giving a pixel density of 199 pixels-per-inch (ppi).

Huawei has opted for a very similar setup, it also uses a 4.3-inch screen with Samsung’s Super AMOLED tech and Gorilla Glass but at a higher resolution of 960×540 pixels granting a much more handsome pixel density of 256ppi.

So Huawei has outdone Samsung with its own technology here, the Ascend P1 S’s screen is much nicer to look at.

Storage
Samsung’s Galaxy S2 offers a lot of bang for your buck in terms of onboard storage with options for either 16GB or 32GB available, plus you can use the micro SD to expand with a further 32GB. It’s also backed up by 1GB of RAM.

Huawei isn’t quite so generous with internal memory, the Ascend P1 S has 4GB built-in, though it has the same 1GB of RAM and micro SD support.

Samsung gets our vote this time.

Just as with our comparison of the Galaxy Nexus and the Galaxy S2, we generally have a bit more faith in the Exynos and Mali-400MP combination for handling the most intensive games and apps, even if the TI OMAP and PowerVR setup is still pretty good. Having said that, the Ascend P1 S has a higher clock-speed than either Samsung model which could make a difference

Operating System
Both phones are Android devices. Currently the Galaxy S2 is running version 2.3 Gingerbread while the Ascend P1 S will launch with the most up-to-date build, 4.0 Ice Cream Sandwich (ICS).

Samsung’s device will be getting the upgrade at some point in the first quarter of 2012 though, so it’ll soon have the same functionality.

Ice Cream Sandwich is a significant step up from Gingerbread, bringing much of Honeycomb’s previously tablet-restricted functionality to the smartphone format.

The interface is generally much slicker and Android’s typically excellent multi-tasking is now complimented by a very useful quick-switching tab. Customisation is much easier and more fluid this time round too.

While we can nitpick Ice Cream Sandwich it’s still a step forward and we’re much happier with using it on the Huawei Ascend straight away.

Camera
Back when the Galaxy S2 came out it was ahead of the pack with its 8-megapixel primary camera but it’s increasingly becoming the norm, particularly for premium flagship devices to sport this kind of setup.

The Huawei also has an 8-megapixel rear-facer with the same 3264×2448 pixel resolution and 1080p HD video capture as the Samsung.

However, while the Ascend P1 S is equipped with a 1.3-megapixel secondary, the Galaxy S2 has a slightly higher-rated 2-megapixel front-facer.

There’s not a huge difference here and both are excellent setups.

Final Thoughts
What’s weird about this is that the Galaxy S2 still hasn’t really been bettered, but here you have a company like Huawei, which traditionally makes phones for carriers to re-brand, making a device which is pretty much as good as Samsung’s shining crown jewel.

We reckon Samsung will imminently be blowing all competition out of the water with a Samsung Galaxy S3 but the S2 and its imitators are still hugely competent phones well worth your attention.

The Galaxy S2 hasn’t been toppled by Huawei’s device but the Ascend P1 S has shown Huawei can compete with the big guys.