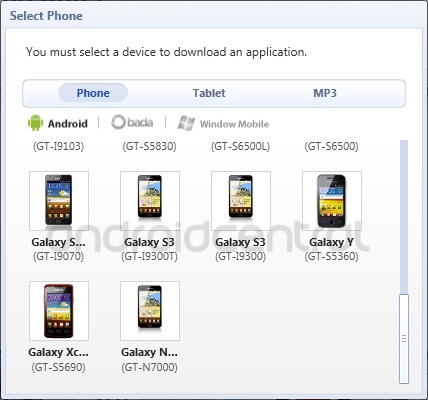 In Samsung Kies software today, the Galaxy has appeared S3. It’s useful to no one but devices testers right now, but it gives legs to an already obvious rumor. The entry is found in a very specific place — you’ll need to go to “Samsung Apps”, select “France” as your region and then track it down in the list of phones that appears. It’s also worth noting that there’s another Galaxy S3 with the model number “GT-i9300T” as well, but there’s no mention of the differences between that version and the regular i9300.

“Samsung Galaxy S III” has been spotted inside the AnTuTu benchmark app. The specs it shows are absolutely beast-like. We have a 1.4GHz dual-core Exynos 4212, 1GB of RAM, a 4.7 inch 720p display (likely AMOLED), a whopping 12MP camera and a 2MP front facing camera.