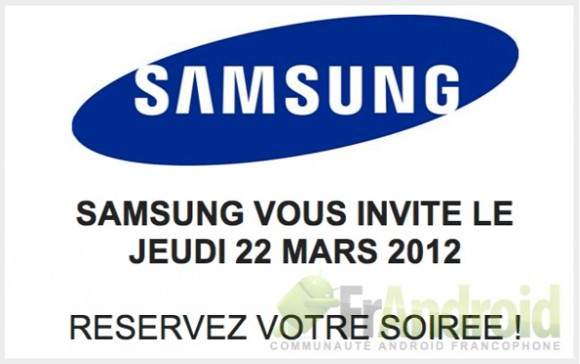 href=”http://www.youtube.com/watch?v=KMSnn2C3EAw” rel=”youtube” target=”_blank” title=”Samsung Sound Logo”>Samsung is holding an event on march 22 in France, and the speculation has immediately turned to the potential launch of the Galaxy S III. Of course, at the same time the company could unveil something for the French market only (since the invite to the event is in French).

As the successor to the Galaxy S II, the Samsung Galaxy S III will be the company’s flagship Android handset of 2012. It will undoubtedly run Android 4.0 Ice Cream Sandwich, while its other features are rumored to include a large Super AMOLED HD display, quad-core processor, 12MP rear camera, and improved battery life.

The announcement was revealed via invite to a handful of french publications, including FrAndroid. While the fan site didn’t reveal a location or exact time, it’ll take place on March 22nd.