GoAndroid
Home Old Samsung Replenish updates to Android 2.3 (Gingerbread) today
The href=”http://www.samsung.com/” rel=”homepage” target=”_blank” title=”Samsung Group”>Samsung Replenish isn’t the fastest Android device, but it sure is the most environmentally (and economically) friendly device on The “Now” Network’s lineup. Though Android 4.0 (Ice Cream Sandwich) was already released, it is highly unlikely devices with hardware limitations such as this will ever see an update. Fortunately, the Replenish has already started receiving an update from Android 2.2 (Froyo) to href=”http://code.google.com/android/” rel=”homepage” target=”_blank” title=”Android”>Android 2.3 (Gingerbread). 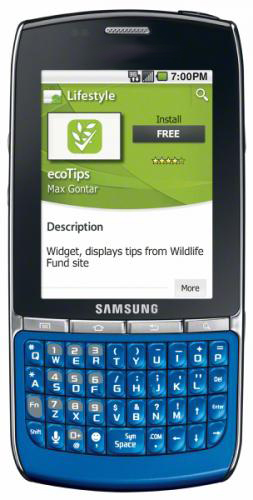 It may not be too different cosmetically, but Gingerbread should still breath new life into the phone. It may slightly improve battery life too. The update will be coming as an OTA (Over-The-Air) and if your device hasn’t received it yet, then don’t worry – it’s coming. Android 2.3 will increase the OS speed and efficiency, add one-touch word selection, and add an SMS messaging fix.
To force Hopefully, most of your devices are on at least Android 2.3 by now, and if not luck may come your way like it did for these folks. And for you Replenish owners out there – how is the update treating you? Was it a smooth transition from Froyo to Gingerbread? Let us know.
[via Android Central]