GoAndroid
Home News Acer Iconia Tab To Be launched on January 15th for $330 And... 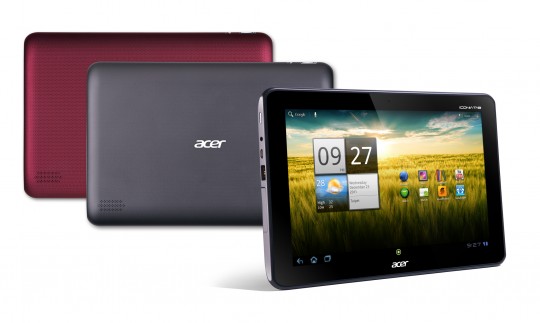 href=”http://www.acer.com/” rel=”homepage” target=”_blank” title=”Acer Inc.”>Acer’s update its initial tablet model has been floating around for a couple of months, and in another one you’ll be able to buy it for yourself. The Iconia Tab A200 will be available at major retailers starting on February 15th, for an MSRP of $329.99. That’s about a hundred dollars less than the A500 model it’s replacing. An Ice Cream Sandwich update was promised sometime in February, but it looks like the tablet will still be running Honeycomb 3.2 at launch.

For your coin you get the standard 10-inch, 1280×800 screen, a Tegra 2 processor and a gigabyte of memory. Storage space starts at just 8GB, but for just $20 more you can get a 16GB version. It’s a chunky tablet at over a pound and a half, but for the extra girth you get a full-sized USB port, a MicroSD slot and a standard-sized microUSB port for charging and syncing. There’s no rear camera at all, but a 2 megapixel front-facing camera should serve for web conferencing. Mindful of the mediocre battery life on the A500, Acer rates the A200 at either hours. Connectivity is limited to WiFi and href=”http://www.bluetooth.org/” rel=”homepage” target=”_blank” title=”Bluetooth”>Bluetooth.

As interesting as the A200 is, you might want to hold off on the preorder for now. There will be dozens of tablets on display at href=”http://www.cesweb.org/” rel=”homepage” target=”_blank” title=”Consumer Electronics Show”>CES next week and href=”http://www.mobileworldcongress.com/” rel=”homepage” target=”_blank” title=”Mobile World Congress”>Mobile World Congress, and certainly at least one or two new ones from Acer itself. We’re particularly eager to see the Iconia Tab A700, a monster Tegra 3 tablet rumores to have a full 1920×1200 display. That one’s likely to be quite a bit more expensive, though, so if you’re looking for a budget WiFi tablet with the standard featureset, go for the A200.