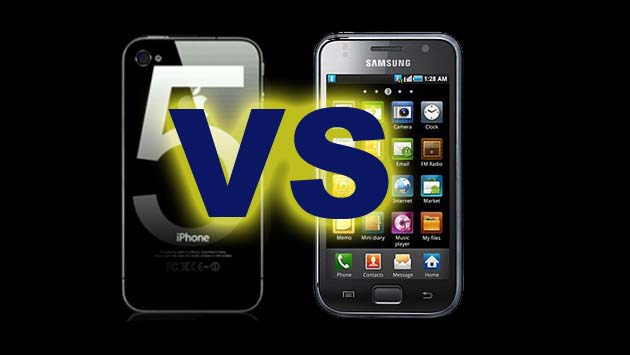 href=”http://www.youtube.com/watch?v=KMSnn2C3EAw” rel=”youtube” target=”_blank” title=”Samsung Sound Logo”>Samsung’s Galaxy S range of devices have come to symbolise the strength in competition faced by Apple’s iPhone. They are highly powerful devices and offer the modern user everything they could want from a top-level smartphone.

The latest of these devices, the upcoming Galaxy S 3, looks set to raise the bar higher than it ever has been in an effort to topple Apple from its throne.

Apple isn’t going to take that sort of challenge lying down though, and the upcoming Apple href=”http://www.apple.com/iphone” rel=”homepage” target=”_blank” title=”iPhone”>iPhone 5 looks like being everything the world expected from the 4S but didn’t get.

So will it be Samsung’s Galaxy S 3 that rules the roost this year, or will Apple’s iPhone 5 retain its position as the world’s favourite premium smartphone? Well, in an effort to find out we’ve set about sifting through the wealth of rumours and leaks on the Web to bring you everything you need to know.

Power
Rumour has it that Apple’s iPhone 5 will boast the company’s next generation of architecture, with the device reportedly being outfitted with the quad-core A6 processor, which will likely be clocked around the 1GHz mark.

On top of the cutting edge CPU you can expect to find the device rocking 1GB RAM and it’s not too far a leap to predict that it will come in 16, 32 and even 64GB flavours.

Samsung’s Galaxy S 3 is rumoured to run on a quad-core Cortex-A9 CPU, clocked at a whopping 1.5GHz and a market leading 2GB RAM.

The device will also support Micro href=”http://www.sdcard.org/” rel=”homepage” target=”_blank” title=”Secure Digital”>SD cards up to 32GB in capacity and will offer the user 16 or 32GB of on-board memory.

Form
Samsung’s Galaxy S series have all been lightweight, plastic fantastic devices with the last version, the Galaxy S 2, being so thin you could probably have a go at shaving with it.

We expect the next generation Galaxy S 3 to follow Samsung’s template quite closely with a super-thin device crafted from advanced plastics, great for those of us that favour a device that we can slip into our pocket and forget is there!

Expect a newly designed, thinner chassis crafted from glass and metal and some parties are even muttering the possibility that Apple may choose to equip the device with a curved display!

The potential from both devices is clear to see and there will be plenty on offer to please even the most pernickety smartphone aficionado.

Which one is best will be a question that falls largely to taste though.

Display
Samsung’s Galaxy S 3 is rumoured to feature a huge 4.7-inch Super AMOLED Plus 720P display which offers support for 3D visuals and is faced with Corning’s next-gen Gorilla Glass 2.

If early reports are correct then users can expect to find a pixel density of over 330ppi on offer in the Galaxy S 3 too, which is great news for Android fans.

Apple’s iPhone 5 look set to be the biggest screened iPhone to-date, with a rumoured 4-inch display offering up a pixel density in excess of 350ppi.

Other rumours point to the display using advanced tech to bring its power demands down by up to 25 per cent, which will doubtless be music to the ears of most current iPhone devotees!

Again, Samsung’s track record works in its favour, as the Galaxy S 2 is one of our favourite devices to snap a photo with. Whether the company will rival the quality of the S 2 or even better it remains to be seen, but we’re quietly confident.

Apple’s iPhone 5 could well feature an upgrade on the 8-megapixel camera offered in the href=”http://www.apple.com/iphone” rel=”homepage” target=”_blank” title=”IPhone 4S”>iPhone 4S, and some parties are even predicting that Apple may equip the device with dual primary shooters for stereoscopic imaging.

We aren’t so sure though. We have a feeling that Apple may stick with the high quality sensor used in the iPhone 4S and look to improve the quality of its output with software witchcraft. One thing that is looking likely though, is that the device will pack an improved secondary camera for some HD FaceTime action.

Features
Rumours abound that both devices will come equipped with NFC technology for contactless payment and data sharing and that they will both also feature contactless charging solutions.

Naturally the Galaxy S 3 will be Android powered, running on the newest iteration of the OS, Ice Cream Sandwich, and may also include 3D TV-out functionality for enjoying your captured HD 3D movies on your big-screen TV.

Apple’s iPhone 5 will ship with the next iteration of the company’s hugely popular iOS, which will include plenty of upgrades and bug fixes. The device may also do away with its famous hardware Home button in favour of touch only operation.

The fact that an Android driven smartphone is, on paper, besting the next generation of iPhone is a testament to how far Android devices have come.

The Samsung Galaxy S 3 is a worthy winner too, offering up much more in the way of exciting rumour and promise.

Apple can, and doubtless will, surprise us though. And we expect the iPhone 5 is going to be a whole new approach from the company in its current, post-Jobs era.

Let’s hope it pushes beyond what we’ve been told to expect though, because if it doesn’t its days as the top smartphone in the world may soon be over.