GoAndroid
Home Old AT&T-branded Samsung Galaxy Note render appears
We’ve been seeing considerable evidence that the plus-sized href=”http://www.samsung.com/” rel=”homepage” target=”_blank” title=”Samsung Group”>Samsung Galaxy Note was headed for href=”http://www.att.com/” rel=”homepage” target=”_blank” title=”AT&T”>AT&T’s network, mostly thanks to some heads-up regulatory filings from the href=”http://www.fcc.gov/” rel=”homepage” target=”_blank” title=”Federal Communications Commission”>FCC. Now SamMobile has got their hands on a pretty compelling render showing the 5.3-inch smartphone with AT&T branding, an indication that the much-anticipated Note will be showing up on American shores sooner rather than later. There’s still no official word from Samsung, though they have indicated that the Galaxy Note will become available in the United States market sometime in 2012. 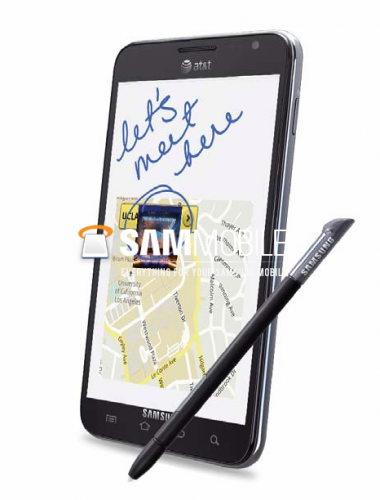 The skeptic in me cautions you to observe that the image could be faked, but honestly, I don’t think it is. The graphical presentation is in line with most of AT&T’s marketing, and the modified 4-button hardware lines up with Samsung’s American versions of the Galaxy S II. For that and other href=”http://en.wikipedia.org/wiki/Americanization” rel=”wikipedia” target=”_blank” title=”Americanization”>Americanized devices, Samsung has dropped its centered Home button layout in favor of the more typical 4-button nav system that most Android smartphones used – or used, up to Ice Cream Sandwich, anyway. The Note runs Gingerbread for the moment, but Samsung has promised an Ice Cream Sandwich update in the next few months. SamMobile notes that the US version has an NFC chip, which the international model lacks.

Between the leaked render and Samsung’s nod to America in its latest PR, a US version of the Note seems extremely likely at this point. The only real question left is when it will arrive – and what kind of competition it will be facing when it does. With a 1.4Ghz dual-core processor and a 720p screen, it’s near the top of the superphone market at the moment. That may not be the case by the spring of this year, when href=”http://www.htc.com/” rel=”homepage” target=”_blank” title=”HTC”>HTC and other plan on releasing their latest round of high-end hardware. If you’re keen on getting the Galaxy Note as soon as possible, you can always buy an unlocked international model from an importer – for a considerable off-contract price.