Samsung unveiled the Galaxy A71 a couple of years back with Android 10 out of the box. The phone features a 6.7 inch Super AMOLED Plus screen paired with up to 8GB of RAM and 128GB of internal storage. Under the hood, Galaxy A71 equips an octa-core processor-based Snapdragon 730 chipset. It houses a quad rear camera indulging a 64MP primary sensor and a 32MP lens for selfies. Samsung packs its A-series smartphone with extra camera features like Fun Mode, AR Doodle, and so on. But, the Galaxy A72 introduced impressive shots in daylight and improved low-light photos. In case you want to make it even better, try the Google Camera on your device.

Google camera aka Gcam or pixel camera is undoubtedly the best camera app available for any Android smartphone. The app was initially designed for Pixel smartphones but developers have modded the Gcam APK and made it available for other Android devices as well. Here we will talk about Google Pixel 5 camera app aka GCam 8.2 mod which is compatible with the Galaxy A72.

Taking the camera section into detail, Galaxy A72 carries an 8MP telephoto sensor, a 12MP ultrawide lens, and a 5MP macro snapper apart from the 64MP primary camera. Samsung has significantly upgraded the camera quality with continuous updates release so far. The 64MP primary sensor and 3x telephoto lens are enhanced than before. But in case you want to capture more lively pictures with different modes, here’s what you can try. 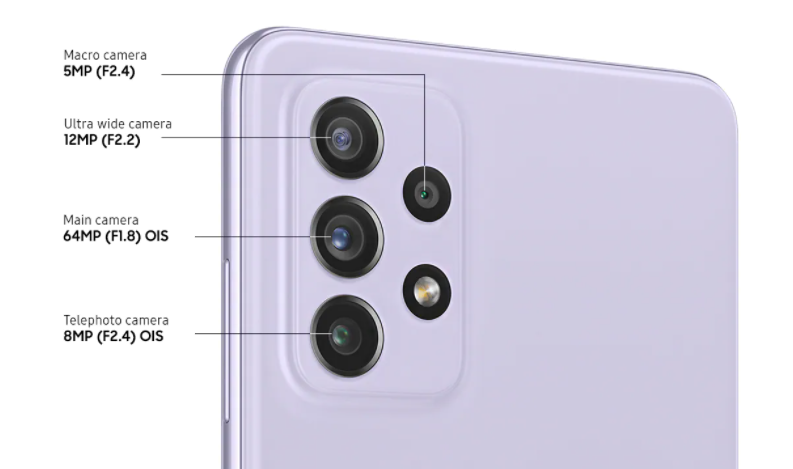 Heading to features, Google Pixel 5 camera app aka GCam 8.2 mod is great on Galaxy A series smartphone. It drives extensive features including Night mode and Astrophotography mode. However, it may have some bugs as this is not a stable version of Google Camera. If you flash the Gcam 8.2 on your Galaxy A72, here’s what you will get alongside your default camera traits.