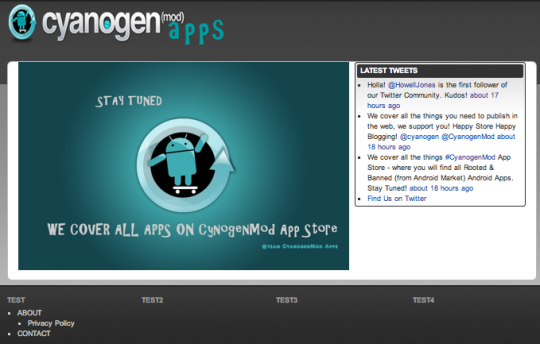 The href=”http://www.cyanogenmod.com/” rel=”homepage” target=”_blank” title=”CyanogenMod”>CyanogenMod team is planning to create an ‘ href=”http://market.android.com/” rel=”homepage” target=”_blank” title=”Android Market”>Android Market’-like application to easily find root applications for your devices. This is a great idea, and even indexing root applications by device compatibility would be a great help to anyone willing to load them to their device. Well, it turns out the website www.cyanogenmodapps.com is in no way connected to the CyanogenMod team.

The news came from Ricardo Cerqueira, part of the official CyanogenMod team, in a Google+ post earlier today. He stated “‘CyanogenMod href=”http://friendfeed.com/weloveapps” rel=”homepage” target=”_blank” title=”Apps”>Apps’, (cyanogenmodapps.com site, twitter, href=”http://facebook.com/” rel=”homepage” target=”_blank” title=”Facebook”>Facebook, and whatever else pops up related to it) is in no way related to or endorsed by +CyanogenMod”. To be honest, the website doesn’t seem like the CyanogenMod team’s style, in more ways than one.

First off, when Cyanogen officially releases something, it’s near perfection – not halfway stitched together. And second, the banner logo seemed almost warped. Something the Cyanogen team wouldn’t have let slip by. Hopefully, the team does agree on creating an Android Market for root applications soon. And you can be sure to find out the official website here as soon as it’s launched.