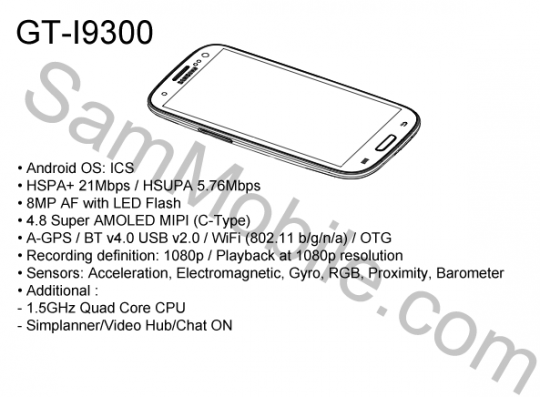 According to SamMobile, they have hands on of Galaxy S III and copied Service Manual of GT-I9300. The page reveals not only the specs of the device but what appears to be a rendering of the handset as well.

According to the leaked specifications the Samsung Galaxy S III will come with Android 4.0 IceCream Sandwich and a 4.8 inch Super AMOLED display, plus a quad core 1.5GHz processor, although the processor doesn’t tie in with the 1.4GHz quad core version that Samsung announced today would be in the new S III.

We were excited to discover this report, but on closer inspection we’ll be taking this one no further and will wait till a week Thursday to hear the truth behind the next Galaxy when it’s announced.