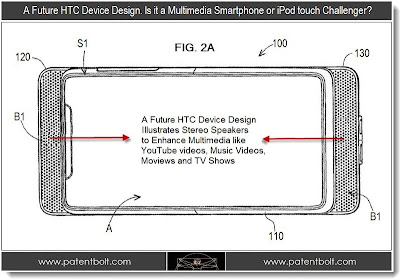 As reported by Patent Bolt, a new HTC device is making its way through patent offices. The patent images suggest that HTC might be working on its own alternative to iPod Touch. Interestingly, this rumored HTC media player has a kickstand and what appears to be a quartet of speakers – two in the front and two in the back, although the patent does not specify whether these are speakers indeed or just decorative elements. Speaker grills are also present at the back, making it clear that this new gadget is more like a multimedia product like iPod Touch, rather than just another smartphone.

But as the case is with many patents that we come across, there is no guarantee that this rumored HTC media player will ever hit the market?