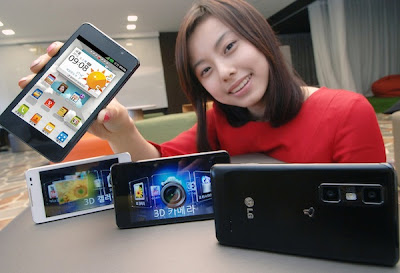 The Optimus 3D Cube features a 1.2GHz dual-core processor, a large 4.3-inch glasses-free 3D display, 16GB of internal storage, NFC support, and Android 2.3 Gingerbread. The phone has been reduced to 9.6mm compared to the Thill’s 11.9mm thickness. On the back, the Optimus 3D cube will have dual 5-megapixel cameras that will allow for shooting video and taking pictures in 3D.

LG has pre-loaded a 3D video editing, 3D mapping apps on the phone.Consumers will be able to download more from LG Smart World.

“Optimus 3D Cube (Cube) in collaboration with LG Electronics, SK Telecom 3G smartphone with planned premium, MWC (Mobile World Congress) from the previous global mobile-related media, the most pre-qualified products is one of the articles.

The most noticeable feature phones can decorate the way you want your own ‘My Suit icon’, ‘3 D editing freedom ‘,’ LG Tag Plus (Tag +) ‘is equipped with specific functions, such as colorful.

“I feel like it icon ‘feature jointly developed by LG Electronics and SK Telecom, the first feature phone, smart phone menus and icons typical user through a simple touch yourself or download a picture you can decorate with images freely is a specialized function.

For example, the application’s icon to the alarm of his image changed to a cute dog or kakaohtok most frequently used icons such as pictures of lovers, etc. can be replaced, via cell phone to express your own individuality young cheungeurobuteo ‘ decorate my phone ‘is expected to provoke a frenzy.

In addition, LG Electronics’ Optimus 3D Cube (Cube) to strengthen significantly in the funny 3D features can be enjoyed in 3D, 2D games, and general imaging and specific applications, such as Naver Map is available to convert to 3D.

Together, the world’s first 3D video editing fun memories Would you like to apply lovers, young married couples want to leave your baby growing more expensive camcorders do not have to buy 3D shoot in 3D, look directly edit the phone without glasses, 3D computer and so you can watch 3D TV connected.

Only aepseutoeoin LG Electronics’ LG Smart World, a 3D-only applications, and 60 kinds of video content starting in the second quarter is expected to provide.

Optimus 3D Cube (Cube) is 9.6mm, 148g of the specification was released to the world’s thinnest, lightest and most of 3D smartphone brightness 520 (2D) / 250 (3D) Nitro is the brightest. 3D Cube on the LG Optimus’ thinnest and lightest 3D mobile phone “field is pushing the Guinness Book of World Records listed.

LG Electronics’ Optimus 3D Cube (Cube) is coming on Feb. 27 held in Barcelona, ​​Spain, MWC (Mobile World Congress) is scheduled to be released in the first