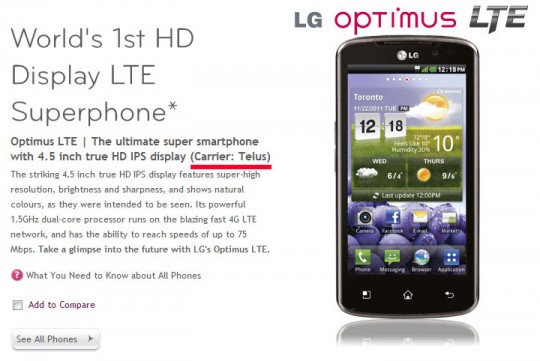 ’ LTE plans are coming together very nicely. We already know they’ll go live in the next few weeks and will be launching a few powerful devices: the Samsung Galaxy Note and the href=”http://galaxytab.samsungmobile.com/” rel=”homepage” target=”_blank” title=”Samsung Galaxy Tab”>Samsung Galaxy Tab 8.9 LTE. With the limited number of LTE devices available it’s expected to see some overlap, thus brings us to the href=”http://www.lg.com/” rel=”homepage” target=”_blank” title=”LG Corp.”>LG Optimus LTE.  href=”http://www.bell.ca/” rel=”homepage” target=”_blank” title=”Bell Mobility”>Bell released this 4.5-inch “True HD” dream back in November and it also seems to be heading towards TELUS’ lineup. There’s no official word from TELUS yet, and no indication of its availability. The TELUS model number is LG-P935, while Bell’s is LG-P930.
By now you should be familiar with the Optimus LTE’s hardware but just in case you’re not: the biggest selling point is the combination of a 1280×720 4.5-inch IPS display and a high-speed LTE connection. Inside the phone you’ll find a dual-core 1.5Ghz processor and 1GB of RAM, with the obligatory 8MP camera thrown in for kicks.

Whatever the reason, expect to see the Optimus LTE grace retail and online Telus stores within the next few weeks.