GoAndroid
Home News Nielsen: Survey Shows Android Slows Down, iOS Gains Steam in Q4
href=”http://nielsen.com/” rel=”homepage” target=”_blank” title=”Nielsen”>Nielsen released some Q4 numbers from research done on recent href=”http://www.wikinvest.com/concept/Smart_phone” rel=”wikinvest” target=”_blank” title=”Smart phone”>smartphone buyers. From the last three months they found that 44.5% of smartphone buyers surveyed bought iOS phones in December compared to just 25.1% in October. Credit can be given to the holiday season (which saw record-high smartphone purchases) as well as the fact that the iPhone 4S was made available in Q4. 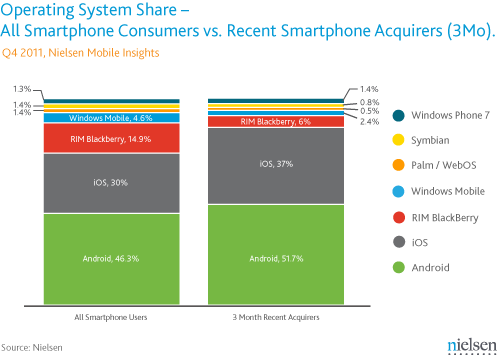 As good of a jump as that was, that still wasn’t enough to topple href=”http://code.google.com/android/” rel=”homepage” target=”_blank” title=”Android”>Android as 46.3% of all buyers surveyed said they had Android phones. These numbers likely aren’t indicative of how overall sales were last quarter but it’s still a decent survey that should translate fairly decent to overall trends.
It’s natural to expect the iPhone to gain steam on Android’s US dominance but we have a feeling that its gains aren’t nearly as significant as this survey shows. Be sure to check out Nielsen’s full slate of findings over at their site.