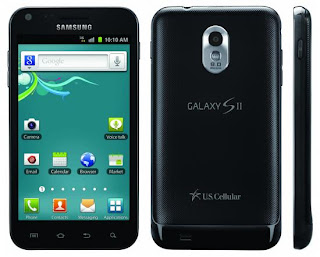 US Cellular’s Samsung Galaxy S II will have a 4.5-inch Super AMOLED Plus touchscreen, a 1.2 GHz dual-core Samsung processor, an 8 MP rear camera with LED flash, 16 GB of built-in storage space, and it will (sadly) run Android 2.3 Gingerbread. The Swype keyboard will come preinstalled.
It will set you back $299 after $100 mail-in-rebate. Don’t get too excited though, because this new Galaxy S II will only use USCC’s 3G network and not their LTE network.
Press Release:

The Galaxy S II is ideal for the multi-tasker who also wants easy access to entertainment wherever they go. You can quickly update your calendar and browse the web to read the latest news, check the weather or get driving directions. The multimedia functions allow you and your family to keep up with your favorite TV shows and keep the kids entertained while you’re traveling with HD Games. With its superior screen display, camera, webcam and access to thousands of helpful applications in the Android Market™, customers will be able to get more done throughout the day.

“The Galaxy S II is the ultimate phone for people looking to simplify and organize their lives,” said Edward Perez, vice president of sales and marketing operations for U.S. Cellular. “The features combined with U.S. Cellular’s unique benefits, like our Battery Swap, make it the go-to device for customers who depend on their smartphone to keep up with their busy schedules.”

Smartphone enthusiasts who switch to U.S. Cellular get unique benefits, like new phones faster without continuously signing contracts, free Overage Protection and can participate in U.S. Cellular’s Trade-In Program. Through the U.S. Cellular Trade-In Program, customers can receive up to $150 on qualifying smartphones by trading in their current phone.

U.S. Cellular offers customers the only points-based rewards program in the industry to get benefits for doing simple things like paying their wireless bill on time, adding a line or referring friends and family. Points can be used for new phones faster, additional lines, devices, accessories and ringtones. It’s one of the reasons U.S. Cellular has the happiest customers in wireless.

For more information about all of U.S. Cellular’s deals, plans and phones, and other restrictions on these offers, visit any U.S. Cellular store, go to uscellular.com or check out U.S. Cellular on Facebook.

The Samsung Galaxy S II will be available for $229.99 after a $100 mail-in rebate. Purchase of a data plan is required, and a new two-year agreement and activation fee may apply for new customers. Additional terms, conditions and/or charges may apply.