GoAndroid
Home News Samsung Galaxy Nexus finally To Hit TELUS On January 13th
Most carriers worldwide have been quick to add the href=”http://www.samsung.com/” rel=”homepage” target=”_blank” title=”Samsung Group”>Samsung Galaxy Nexus with Android 4.0 Ice Cream Sandwich to their lineup and while we complained that href=”http://www.verizon.com/” rel=”homepage” target=”_blank” title=”Verizon Communications”>Verizon took forever — they weren’t the only ones. It appears TELUS up in Canada will also be late to the game, but better late than never. They’ve just announced the flagship Galaxy Nexus will be available next week. 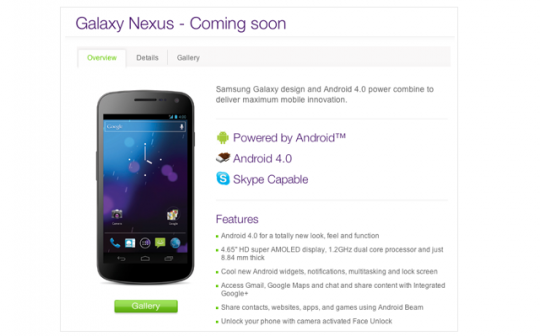 Other carriers such as href=”http://www.bell.ca/” rel=”homepage” target=”_blank” title=”Bell Mobility”>Bell and Virgin Canada have been offering the Nexus for some time and reports have recently suggested href=”http://www.rogers.com/web/Rogers.portal” rel=”homepage” target=”_blank” title=”Rogers”>Rogers and Fido both will also start carrying this device early January. Today TELUS has officially announced over on Twitter they’ll be carrying the Galaxy Nexus on January 13th but no pricing information was given with the announcement. With Bell launching it last month it’s safe to say TELUS is a little late, but just like Verizon it should still sell extremely well being a “Google Nexus” and all.
At least they didn’t name it the Galaxy Nexus X and make it a TELUS branded phone right? Either way this is extremely good news for those north of the States that have been patiently awaiting this awesome smartphone. Other Canadian carriers have been pricing the Galaxy Nexus for only $159 with a 3-year contract so we are assuming TELUS may follow suite. Once we hear some details on pricing and options we’ll be sure and update.
Who’s buying one for TELUS come the 13th?