GoAndroid
Home Old Samsung Galaxy S III Image Pops Up in Press Invite
The Samsung Galaxy S III Which is getting huge rumors these days. We also have and posted various Rumors. Today according to Korean Site Daum Samsung will launch Galaxy S III next month on 22nd May in London, UK with photo of invitation to a launch event in London. The date is a bit strange – normally a press event such as this is not scheduled out so very far ahead. In Photo its written London, United Kingdom instead of England. Then looking at the design while I could see this being Samsung’s next flagship as they try to differentiate themselves from the competition, and the Galaxy S II, this just seems a little much. 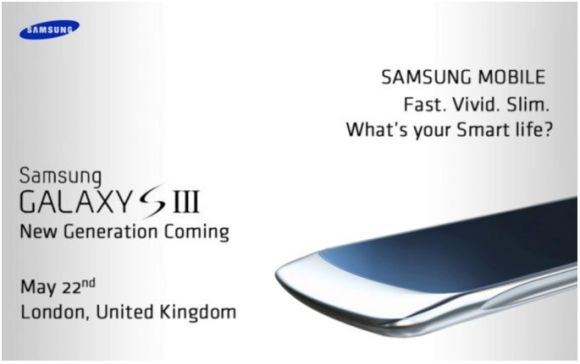 This is a very interesting leak that is for sure. Either someone made a clever and believable press invite image, or this is indeed the real deal.
Via: The Verge
Source: Daum