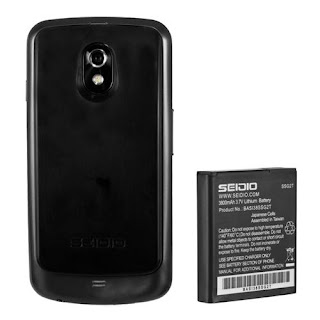 Samsung released a battery pack for the Galaxy Nexus not too long ago. This saw the device’s battery being bumped up to 2,100mAh, but if you think that 2,100mAh is still not enough, or if you’d like the peace of mind knowing that you will be able to use your device for a full day without it dying on you, the good news is that Seidio has recently launched a 3,800mAh battery that (on paper) would even put the Motorola Droid RAZR MAXX’s 3,300mAh battery to shame.

Unfortunately with a battery that size, you would have to sacrifice the svelte figure of your Galaxy Nexus. Based on photos the difference in size is extremely noticeable but we guess that’s the price you’d have to pay for extra juice on your phone. Sadly another price you’d have to pay for the extra juice would be the lack of NFC capabilities should you go with this particular battery, which may or may not matter given how NFC still has yet to see widespread adoption.