GoAndroid
Home Old Springboard of T-Mobile spotted with Android 4.0.1 on board 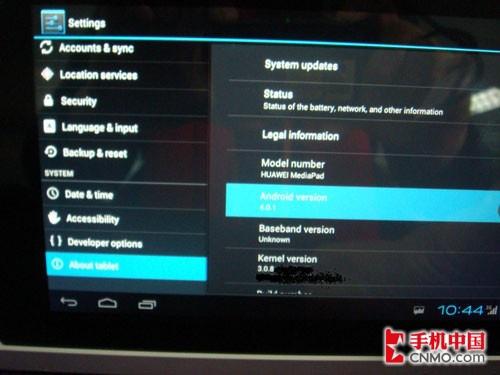 For those who might have gotten their hands on the Huawei MediaPad, or the T-Mobile Springboard as it is better known in the states, it appears that thanks to a leaked screenshot, what we are looking at above is the tablet running on none other than Android 4.0.1 Ice Cream Sandwich.
The tablet was originally released with Android 3.2 Honeycomb on board and costs a relatively affordable $430 (this was before the rel=”amazon” target=”_blank” title=”Kindle Wireless Reading Device, Wi-Fi, 6″ Display, Graphite – Latest Generation”>Amazon Kindle Fire) with relatively decent hardware specifications to match. The update to Android 4.0.1 doesn’t really surprise us considering that a while back the company released a beta Android 4.0 update for the Honor handset.
No word when the update will arrive, but hopefully based on this screen shot the update should be closed to completion and should start making its way to owners of the Springboard/MediaPad soon.
[Image credit – CNMO]