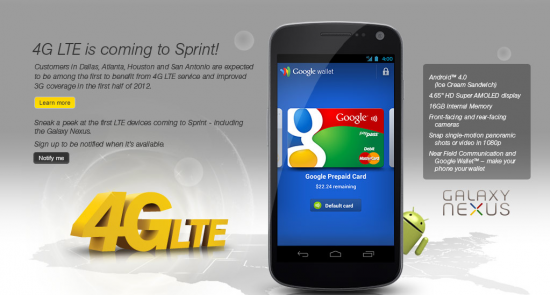 href=”http://sprint.com/” rel=”homepage” target=”_blank” title=”Sprint Nextel”>Sprint has thrown up a landing page for their upcoming 4G LTE network and it comes with the reveal of two new handsets, whether intentionally or not. Outed were a Sprint version of the Galaxy Nexus and the unannounced LG Viper, a dual-core href=”http://code.google.com/android/” rel=”homepage” target=”_blank” title=”Android”>Android 2.3 smartphone with NFC support. While the specs on the Nexus are old hat, the Viper 4G LTE features a 4.0-inch WVGA display, 5.0MP camera and front-facing camera, and NFC with Google Wallet. A Sprint-ready Galaxy Nexus also means official support for Google Wallet on that device, a controversial subject concerning the launch of the handset on Verizon. Release dates and pricing are not known at this time, but their presence on the LTE launch page suggests these new phones will land concurrently with the next-gen cellular network.