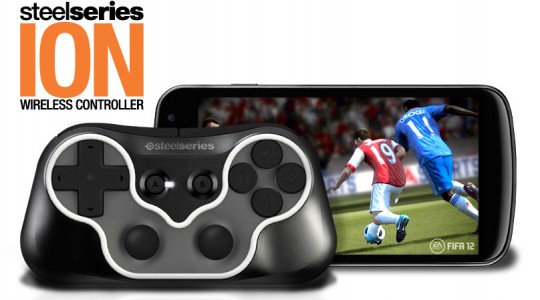 Android gamers get it rough sometimes: since the early days of using WiiMotes and bulky add-ons to replicate a console experience, the Sony Ericsson XPERIA Play has been the only real solution for those who crave hardware controls. But the dearth of physical controls may be at an end, thanks to gaming accessory company SteelSeries. Known for their mice, mousepads and keyboards, the company is branching out into Android with its Ion Bluetooth controller. A few others have tried, but the Ion looks like the best option yet for serious gaming.

The diminutive hunk of plastic uses the same layout as the PlayStation Dual Shock, and should be familiar enough for anyone who’s played a console game in the last few years. Double joysticks, four face buttons, start, select and two shoulder buttons should be enough for almost everyone, though controlling games through OnLive may get a little tricky. The controller is sized to fit in a pocket. The mock-up in SteelSeries’ photo looks just a little smaller than a Galaxy Nexus. It appears that the controller recharges through the same MicroUSB port as most Android phones – a smart choice.

An Android app will allow players to customize controls for each game, and combined with Ice Cream Sandwich’s built-in support for controllers, should allow almost any button-based game to work. SteelSeries claims that the Ion’s Bluetooth interface makes it compatible with multiple platforms, including PCs. The company hasn’t offered a price yet, but it’s aiming for a second or third quarter 2012 release. Razer, the ball’s in your court.