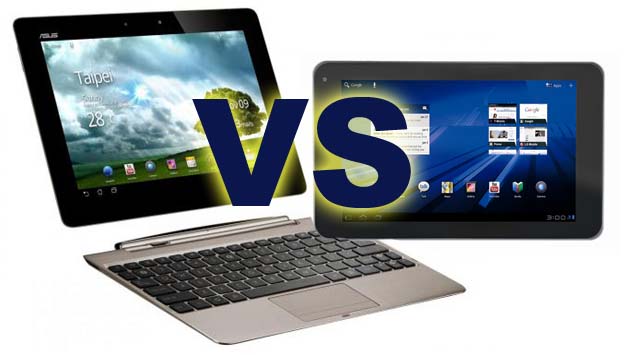 The tablet market is awash with quality devices, all vying to end up in your shopping bag this sales season, but which tablet will give you the most for your money?

Do you choose power before portability? Should you opt for a device with expandable memory? Or should you just cast all research aside and just choose the biggest, fastest, most expensive device on the market?

Well, we’re here to help you wade through the myriad statistics on offer, as we take the latest, greatest tablet from Asus, the Eee Pad Transformer Prime, and weigh it up against one of last year’s surprise packages, the LG Optimus Pad.

Asus’ Eee Pad Transformer Prime is kitted out with a stunning 10.1-inch Super IPS+ LCD display that is super responsive and glorious to behold.

The screen operates at 1280 x 800 and features a pixel density of 149PPI, which is more than enough to provide some of the crispest visuals around.

The LG Optimus Pad offers up an 8.9-inch LCD touchscreen that holds its own against the mighty Transformer Prime, with a resolution of 768 x 1280 and a thoroughly impressive pixel density of 168PPI.

The extra clarity is certainly not to be sniffed at, but we aren’t sure it’s enough to make us turn our backs on an inch more screen space and the deeper colours of the Asus.

LG’s Optimus Pad is powered by nVidia’s Tegra 2 chipset, with the dual-core CPU clocked at 1GHz. The perennially reliable ULP GeForce GPU takes care of the visuals, and makes gaming an enjoyable experience on the device.

The Optimus Pad also boasts 1GB RAM and 32GB of on-board storage, but offers no support for removable memory.

Asus’ Eee Pad Transformer Prime has yet to be bested in this round though, and it’s easy to see why when you take a look at its spec sheet: 1.3GHz quad-core CPU, ULP GeForce GPU, 1GB RAM, 32 or 64GB of storage and support for Micro SD cards up to 32GB capacity.

There really isn’t a tablet to touch the Transformer Prime when it comes to horsepower and we expect it will remain that way for a while yet. So if power’s what you’re looking for you’ve found the device for you.

Both of these tablets are powered by Google’s Android OS, specifically version 3.0+, otherwise known as Honeycomb, which was tailored for tablet use.

LG’s Optimus Pad ships with version 3.0 of the software, while the Asus Eee Pad Transformer Prime leaves the factory fitted with version 3.2, which offers support for visually improving apps on larger devices and the odd bugfix thrown in for good measure.

Honeycomb itself is a fast, fun affair, with plenty of apps available, a new, richly designed UI and some neat notification tweaks, as well as updated core applications. It’s eminently customisable, offers full flash browsing and largely does anything your netbook can do equally as well (with the help of the right app, naturally).

There a few idiosyncrasies that prevent Honeycomb from keeping up with Apple’s iOS though. For example, the lack of Android 3+ applications is hugely detrimental, and you’ll also have to contend with the odd crash, which is something we didn’t enjoy, but overall it’s a decent platform that will continue to improve.

There’s no denying that both of our contenders here are well built. They feel solid, balanced in the hand and reassuringly heavy, without being overly cumbersome.

The Asus Eee Pad Transformer Prime is arguably the better looking of the two, and at nearly 4mm thinner than the Optimus Pad it’s definitely the more comfortable to use, and also the more portable, but the LG’s effort is by no means big or unpleasant to look at.

One aspect that we like about both tablets is that they feel, and largely are, durable. There’s nothing worse than holding a shiny, expensive device and worrying about it hitting the floor with a smash, but both of these devices give off the ‘we can take it’ vibe that will make you want to pick them up and play with them (NOTE – We aren’t saying that they’ll take being bounced on your floor, so don’t try!).

The Asus Eee Pad Transformer Prime features the very best camera that we’ve seen on a tablet to date.

The 8-megapixel primary shooter, which offers geo-tagging, autofocus, LED flash and 1080P video capture, is a great performer which is fully capable of capturing print-worthy images in good light and captured video is of a generally high standard too.

The device’s secondary 1.2-megapixel camera is perfect for video chatting and rounds off some very nice photographic capabilities.

LG’s contender also has a nice 2-megapixel secondary camera which is great for video calling.

While it’s a great performer, the general standard of still images is significantly lower than that of the Transformer Prime, and all the bells and whistles can’t make up for a good, standard snapshot, which is largely all a tablet is going to be used for.

As we’ve come to expect, Asus’ Eee Pad Transformer Prime has blown another contender out of the water!

We’re fast running out of superlatives to describe this little box of tricks. It’s as powerful as a netbook, as portable as a notepad and has all the top-tier features of a high-end smartphone; there really isn’t anything on the market to touch it, save for Apple’s iPad 2.

LG’s Optimus Pad is a nice enough device, but it doesn’t excel in any single area, while the Transformer Prime excels at nearly everything.

Put simply, if you’re in the market for a tablet you should either buy the Asus Eee Pad Transformer Prime or the Apple iPad 2; and that only holds its own against Asus’ device thanks to its killer OS!