GoAndroid
Home News ASUS Transformer Prime rooted — bootloader will have to wait
The all mighty and powerful ASUS Transformer Prime has been rooted by a few awesome developers from the Android community. Thanks to @TeamAndIRC and their new root tool that hasn’t yet been released we now have href=”http://en.wikipedia.org/wiki/Superuser” rel=”wikipedia” target=”_blank” title=”Superuser”>root access on the quad-core Transformer Prime. With all the recent href=”http://en.wikipedia.org/wiki/Booting” rel=”wikipedia” target=”_blank” title=”Booting”>bootloader news this is a good start indeed. 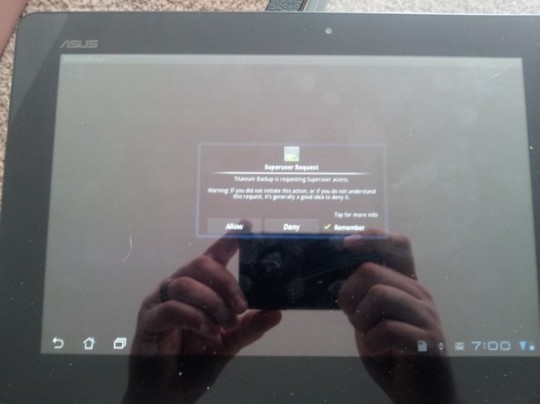 At this time we don’t have a lot of details regarding the root method other than they are using their new Nachoroot tool to gain and secure the exploit. Whoever thinks up these names should work for href=”http://www.motorola.com/” rel=”homepage” target=”_blank” title=”Motorola”>Motorola and get some better ideas out than the XOOM.
Justin Case from TeamAndIRC hasn’t yet released more details or when the root method will be released but we should be seeing it any day now. The chance that they are holding out til after the Android 4.0 update coming January 12th is a possibility now that ASUS has confirmed its date. We are assuming they’ll want to wait on releasing the root method so ASUS can’t patch it — just in case (get it?). Here is a little video released showing the Prime rooted and fully working. We can expect to hear more details and see a release soon so stay tuned.