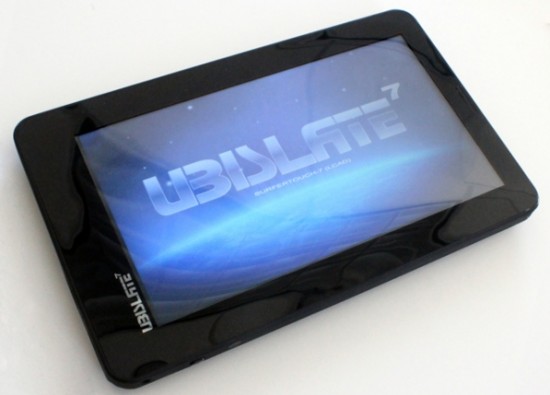 Time for an update on the story of the “computer for masses,” an href=”http://code.google.com/android/” rel=”homepage” target=”_blank” title=”Android”>Android-based tablet with a price tag of only 2,500 rupees (~$50) thanks to government subsidization. The road to cheap Android for all wasn’t a smooth one, as the Indian government had to cancel their initial contract before finding a new manufacturer to produce the device. After much speculation, the tablet, now dubbed the Aakash, went on sale December 14th. The response has been “overwhelming” according to a spokesperson for Datawind, the British company now in charge of manufacturing the slate. Around 400,000 Aakash tablets have been sold, more than the 300,000 combined tablet sales in India for the year prior to the release of the subsidized offering.
Through April the Datawind plans to churn out “75,000 units per factory per month” and an updated version, the Ubislate 7, is already scheduled for March. The Aakash should see its price fall to the promised $35 mark through further subsidy and could eventually be available for as low as $10.
[via AFP]