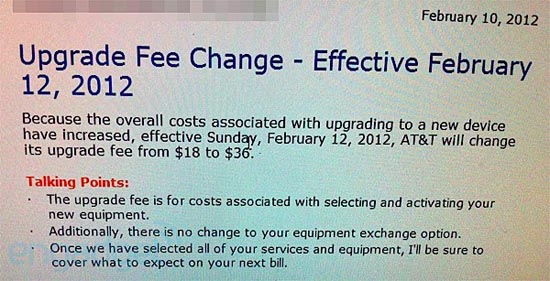 Now when You Pick up new phone from AT&T you have to pay $36 fee associated with upgrading to a new device. Documents have been leaked showing that AT&T will be doubling its upgrade fee from $18 to $36 effective this Sunday. AT&T responded and confirmed the decision. Here’s full statement:

“Wireless devices today are more sophisticated than ever before. And because of that, the costs associated with upgrading to a new device have increased and is reflected in our new upgrade fee. This fee isn’t unique to AT&T and this is the first time we’re changing it in nearly 10 years.”

As one would expect, many people aren’t happy about this sudden increase in a fee that shouldn’t exist in the first place. A few months ago Verizon Wireless also imposed $2 fee for those who made their payments online, But they Bactracks from their Decision.

So, if you’re an AT&T user, there’s hope. Contact your local news outlets, write on AT&T’s Facebook wall, start a petition, express yourself on Twitter, and do whatever else you can to let AT&T know that this is a terrible idea.

Join GoAndroid on Telegram
via BGR