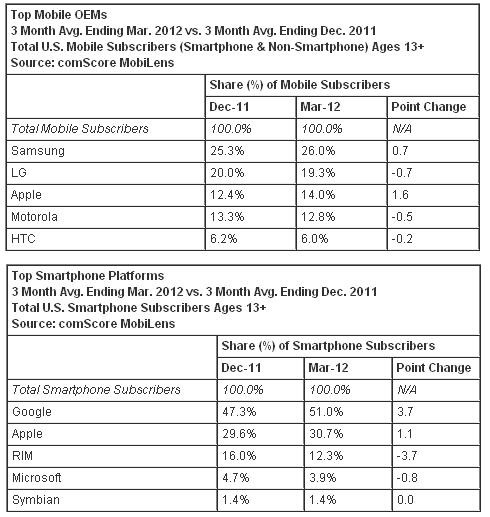 comscore’s data for Q1 2012 is revealed according to which Android is sitting at the top of Smartphone Sales about 51% users in US. Samsung is the top handset manufacturer overall with 26.0 percent market share, followed by LG with 19.3 percent share.While Apple captured more than 30 percent. As is often becoming the case, it was Microsoft and RIM that took the biggest hit, with the BlackBerry dropping as much as Android gained and tumbling down to 12.3 percent.
In March, 74.3% of U.S. mobile subscribers used text messaging on their mobile device. Downloaded applications were used by 50 percent of subscribers up 2.4 percentage points, while browsers were used by 49.3 percent up 1.8 percentage points.
Source: comScore