GoAndroid
Home Android ICS Share On The Rise Now On 4.9% of Devices

After 7 months of official ICS Release only 4.9% devices are running on it. But according to Google its now boosting pace and in just a month about 4.9 %devices started using this platform from 2.9 % last month. This change occurs due to some newly launched devices on Android 4.0 Ice Cream Sandwich and some updated from older versions. As Samsung introduces ICS updates in Europe and Korea, HTC also announced update for 16 Phones. HTC One series also made a great boost in booming ICs share. 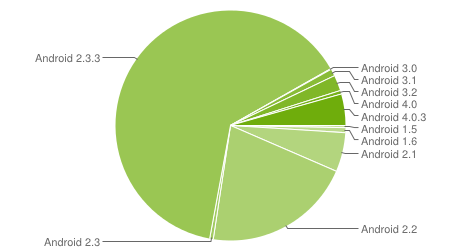 Additionally, there are 850,000 Android activations per day. There are 450,000 apps on Android Market, that’s triple the amount just one year ago, when Google announced 150,000 total apps. Froyo (Android 2.2) and Gingerbread (2.3) remain the most popular, accounting for 20.9 percent and 64.4 percent respectively.