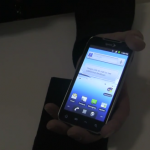 Sprint’s LG Viper 4G doesn’t have a release date or pricing, but we had the opportunity to get a first look at one of the first LTE devices for the carrier here at href=”http://www.cesweb.org/” rel=”homepage” target=”_blank” title=”Consumer Electronics Show”>CES. The phone is an amalgamation of many of the top features from recent LG releases, from its LTE radio to the super bright NOVA display. We first saw the screen technology on the LG Optimus Black, which debuted at last year’s CES. The display measures in at 4.0-inches and rests atop a casing produced from mostly recycled materials, furthering Sprint’s eco-friendly agenda. The handset looks compact for a device with a screen of its size and feels solid, if not a bit stout. Inside we find a 1.2GHz dual-core processor.

The device offers a number of firsts for Sprint, including the ability to shoot both 720p HD and full 1080p HD video with its 5MP camera. A 1.3MP camera is found around front for video conferencing. One first the Viper won’t offer is the inclusion of Ice Cream Sandwich. Given the recent release of the new Android version to OEMs, Sprint and LG will launch the phone with Android 2.3.7. The window remains open for an eventual Android 4.0 appearance. Check out our video above for the full rundown.