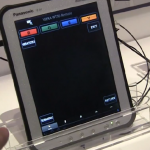 Panasonic is coming out with an href=”http://www.youtube.com/watch?v=U1e0q2DYAd8″ rel=”youtube” target=”_blank” title=”Unboxing Acer Aspire One Android netbook”>Android tablet for businesses. It’s going to be called the Panasonic Toughpad and is a large rugged slate that is about as ugly as href=”http://en.wikipedia.org/wiki/Cerberus” rel=”wikipedia” target=”_blank” title=”Cerberus”>Cerberus but also as touch as Cerberus. This isn’t your traditional Android tablet as Panasonic has specifically made it to interface with their Viera Smart television units.

Using WiFi you can send content to and pull content from your television. For instance, if you have a photo or a webpage on your Toughpad you can “flick” it up to the TV and it’ll show up there. Similarly, you can bring content from the TV to the tablet (perhaps you found some directions to a restaurant and you want to take it with you).

The tablet can also be used as an oversized remote control among other things. Panasonic said they don’t currently have plans to bring the Toughpad to common consumers. I found that odd considering none of their use-cases showed the device being used in a busniess sense.

Overall the idea of the tablet and smart TV combo seemed pointless to me. The use cases all involved sharing content between the tablet and the TV and I don’t think many business people have a need for something like this.

The only thing I can think of to make this make sense is that the Toughpad was just being used as a showcase unit with a consumer model currently being planned and developed for distribution soon. Don’t quote me on that at all. See for yourself above.