GoAndroid
Home News Kindle Fire Going to be Bigger at 9" 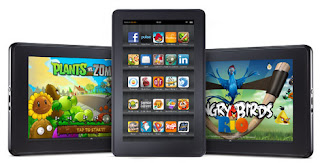 Amazon is going to launch Kindle fire 9″ in Mid 2012. Apparently Chad Bartley, an analyst for Pacific Crest increased his estimates for sales of the href=”http://www.amazon.com/kindlefire” rel=”homepage” target=”_blank” title=”Kindle Fire”>Amazon Kindle Fire tablet for 2012 this week and also claims that Amazon is gearing up to launch new versions of the tablet later this year. Bartley Says:

Amazon will be looking at a much lower price for the 9-inch Kindle Fire than Apple will be demanding for the Apple iPad 3, so a new 9-inch Kindle Fire just might appeal to more people out there especially when times are tough finance wise.