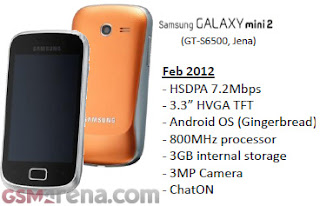 Galaxy mini 2 S6500 Which is code named Jena. Some Specs are leaked in a picture released by GSMArena.  Samsung Galaxy Mini S5570 has rocked some markets a year ago.

The promo image labels the Samsung Galaxy mini 2 S6500 for “February 2012”, which means it might debut at the MWC.