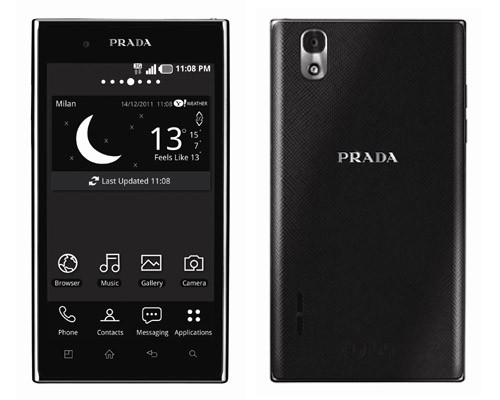 No, the image you see above is not in black in white — it’s actually in full color. That’s LG’s newest smartphone, the “Prada Phone by LG.” First thing I’m sure you’ve noticed the device is its minimalist “Prada themed” black and white UI, a clear departure from the manufacturer’s pseudo TouchWiz found on devices like the Nitro HD. Because, you know… nothing says “class” like black and white.
The device has just launched in its homeland of South Korea and besides its sexy good looks, the LG Prada Phone 3.0 features a 4.3-inch 800×480 IPS display, 1GHz dual-core processor, 8MP rear/1.3MP front facing cameras, 8GB of internal memory and runs on Android 2.3.7 Gingerbread. LG did mention that the device would see an Ice Cream Sandwich upgrade sometime during Q2 of next year.
While only available in Korea, the device is expected to hit other regions like Europe sometime in January. The LG Prada Phone 3.0 retails for 899,800 KRW which translates roughly to about $776 — but that’s the price you pay for luxury. I’d be willing to bet this will be the only phone Bond uses in his next action blockbuster. Full press release can be found below.

PRADA PHONE BY LG 3.0 BEGINS WORLDWIDE ROLLOUT
Much Awaited Designer Smartphone Arrives in South Korea Today, Europe and Asia in January
Seoul, 28 December 2011: LG Electronics (LG) made its highly anticipated PRADA phone by LG 3.0 available to the public today in South Korea. The phone is now available to Korean customers and scheduled for the release in most European countries and other parts of Asia in January.
The phone, its existence announced only last month in Seoul during the joint signing ceremony, was unveiled for the first time at a showcase event in London two weeks ago. The stylish new device has been attracting significant attention for being the only smartphone with premium branding on the market currently.
The PRADA phone by LG 3.0 is the third handset from the PRADA and LG collaboration following the highly successful PRADA phone by LG 1.0 and 2.0 phones. The latest offering continues in the same tradition combining PRADA’s trademark chic simplicity with LG’s leading technology, including one of the brightest 800-nit NOVA display and a PRADA themed UI for truly unique mobile experience.
Following PRADA’s renowned design philosophy, the handset features a full glossy touchscreen on the front and PRADA’s signature Saffiano pattern on the back. Impressively thin at only 8.5mm, minimal hardkeys and a classic black finish complete the phone’s sleek look.
With 1.0GHz Dual-Core/Dual Channel architecture, the PRADA phone by LG 3.0 is as effective as it is stylish. The phone runs on Android Gingerbread OS with an update to Android Ice Cream Sandwich scheduled for the second quarter of 2012.
For more details on this unique collaboration, please visit the official site of PRADA Phone by LG 3.0 at www.pradaphonebylg3.com.
Key Specs:
– Operating System: Android 2.3 Gingerbread
– Memory: User 8GB maximum (varies depending on carrier requirements)
– Display Size: 4.3 inches
– Resolution: WVGA (800 x 480)
– Display Brightness: 800 nit
– Camera: 8MP
– Processor: 1.0GHz Dual-Core / Dual Channel
– Battery: 1540mAh