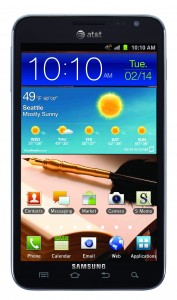 According to BGR, href=”http://www.att.com/” rel=”homepage” target=”_blank” title=”AT&T”>AT&T is planning on releasing the highly-anticipated href=”http://en.wikipedia.org/wiki/Samsung_Galaxy_Note” rel=”wikipedia” target=”_blank” title=”Samsung Galaxy Note”>Samsung Galaxy Note on February 18. The hybrid phone/tablet will sell for $299 when signing up for a new 2-year contract. The information about the release date was obtained by BGR from a trusted source. The Galaxy Note has been available in Europe for quite some time. It features a massive 5.3-inch HD Super AMOLED display, 1.4GHz dual-core processor, 4G LTE connectivity, Android 2.3 Gingerbread, 1GB of RAM, 16GB of internal storage, and more.

We got a chance to play with the Galaxy Note during CES 2012 earlier this year.