GoAndroid
Home Google Google Goggles And Maps Updated With Night Mode And Many More New...
Bringing a few needed improvements to href=”http://www.google.com/mobile/goggles/” rel=”homepage” target=”_blank” title=”Google Goggles”>Goggles, and an awesome new night mode to href=”http://maps.google.com/” rel=”homepage” target=”_blank” title=”Google Maps”>Google Maps Navigation and more. We’ve snapped a few screenshots of the what’s new page for those interested and have all the details below.
Download the latest release of Google Maps, and never carry a paper map again 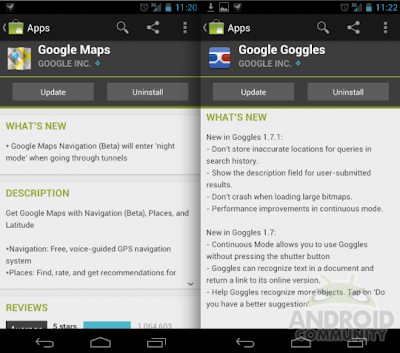 First off, Google Maps has seen more than a few updates lately but all have been very minor and the same applies here. Only adding a “night mode” for navigation while going through tunnels. Here in Vegas we don’t have too many of those, and instead just lots of Casinos. Give the new update a try and check out that night mode.Search the real world by taking a picture.

Next is href=”http://google.com/” rel=”homepage” target=”_blank” title=”Google”>Google Goggles — yes they are still updating this application occasionally although it has been a while. Goggles appears to have received a rather large update bringing all sorts of improvements and big fixes this time around. The performance improvements for continuous mode are a welcomed addition.