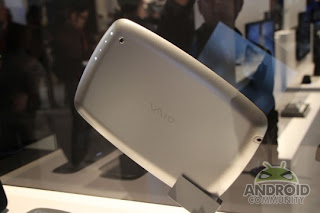 Before the rumor mill runs wild, let me say that this is absolutely, positively a concept device – they didn’t even have a working example of the primary mechanism. The idea of a device that changes itself to suit particular usage cases is nothing new, even if it’s currently a little less dramatic. These kinds of materials and processes have been shown in automotive concepts before, and expanding their sphere of influence to gadgets isn’t that far out when manufacturers are desperate for hardware differentiation.
That said, there are already a few problems with the idea. Whatever process goes into that flexible back, it almost certainly isn’t as tough as plastic, metal or even tempered glass – a careless toss of your car keys seems like it could tear or fray the material. And more moving parts in a gadget, especially one as comparatively simple as a tablet, means more points of possible failure. (Rest in peace, Palm Tungsten T3.) But the fact that more companies are considering user-friendly additions like a kickstand, especially those as obsessed with clean design as Sony, is promising.